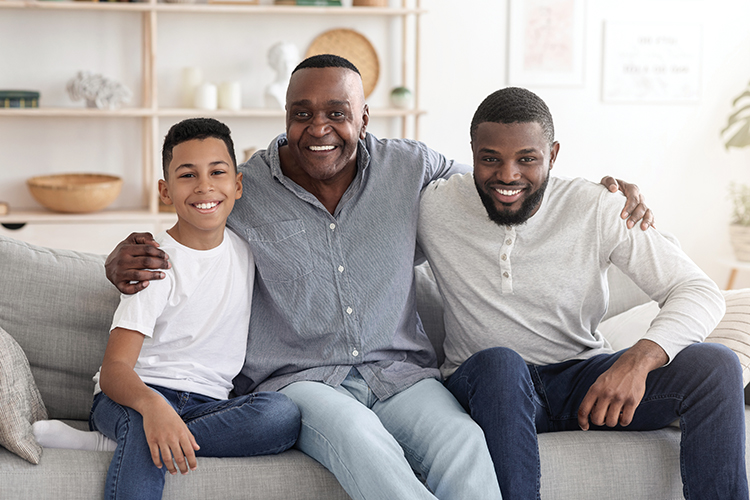 Genetic counsellor, Sarah Walters, educates us on the probabilities of inherited genetic predisposition to prostate cancer.

Prostate cancer is one of the most common cancers affecting men; approximately 1 in 8 men will be diagnosed during their lifetime. Mostly, it’s diagnosed in men aged 65 and older. Risk factors include lifestyle, age, and ethnicity.

Sometimes there is an inherited genetic predisposition to prostate cancer and this may have a considerable impact. Clues to understand whether your family may be at an increased risk include a family history of prostate and other cancers, such as breast cancer (in either men or women), ovarian cancer and colorectal cancer.

Genetic testing was conducted and a BRCA2 pathogenic sequence variant (previously known as a mutation, or a genetic fault) was detected. This provided valuable information in terms of early screening and proactive healthcare choices for Peter’s children and grandchildren.

Studies in the last five years into the genetic predisposition of men who are diagnosed with prostate cancer has shown that somewhere between 15 and 20% of affected individuals have a faulty gene that is underlying the condition.

Traditionally, only the BRCA1 and BRCA2 genes were tested as part of what is known as inherited cancer syndromes. However, with genetic testing becoming more widespread, and more cost-effective, more genes are now being tested. These include genes known as the DNA mismatch repair genes.

The DNA mismatch repair genes have been well-described in causing colorectal cancer. In America, the National Comprehensive Cancer Network (NCCN) has produced guidelines for prostate cancer and suggest genetic testing with an expanded panel of genes for those with high-risk disease, regardless of family history.

When there is a positive genetic change in an individual, depending on the gene affected, risks for prostate cancer can increase generally between 20-30%. However, some genes may increase the risk around 60%. Identification of a faulty gene that increases the risk of developing prostate cancer enables a person to engage in early screening, and surgery before metastasis has occurred. This in turn will improve the prognosis and quality of life for the affected individual.

Freedom of choice to know your risk

From experience, it’s worthwhile to evaluate each family on their own histories and choices. By adhering to strict guidelines regarding who should have access to genetic testing and who doesn’t qualify, would undermine the freedom of choice, and also possibly result in those with a genetic predisposition, no matter how low the risk, to remain undetected.

Treatment for prostate and other cancers has improved to the point where genes may guide the most appropriate and effective treatment. Therefore, genetic testing has become an important tool in optimal management of patients.

Genetic clinics are available countrywide to assist with test information and risk determination. We encourage family members to reach out and become informed about their personal risks.

Sarah Walters is a HPCSA registered genetic counsellor and medical biological scientist, specialising in cytogenetics. She has over 20 years’ experience of working in genetics in both the public and private sectors.