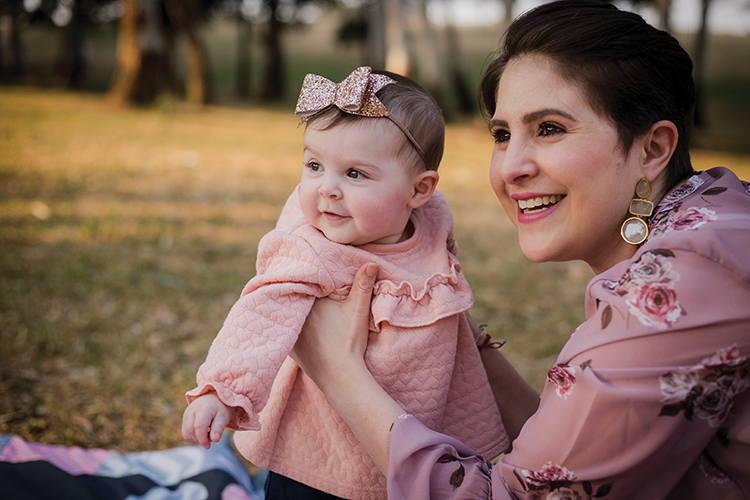 Ensuring a sibling for our daughter

Jody Treger tells us how she and her husband, Ari, froze embryos before she started cancer treatment to ensure their baby daughter will have a sibling in the future.

Jody Treger (35) lives in Gauteng with her husband, Ari, and their 8-month baby girl.

Jody was in her last trimester when she found a lump in her breast. “I was advised at the time not to worry about it until after I gave birth. Our beautiful daughter was born in February this year and naturally life was consumed by this incredible tiny human, lack of sleep and general survival. I let things slip and didn’t follow up.

At the end of July, while mourning the loss of a loved one, I felt two more lumps (under my arm and in my neck). It was then that I decided to go to a

GP who sent me directly to get a mammogram, scan and biopsy. Two days later, we got the results, I had Stage 3 triple-negative breast cancer, and our world was turned upside down,” Jody recalls.

Jody’s planned treatment was to undergo six TAC chemo sessions (docetaxel, doxorubicin, cyclophosphamide) once every three weeks intravenously, via a port. She would then have surgery, either a lumpectomy or mastectomy, depending on the results of her genetic testing. She tested negative for the BRCA gene but will be meeting her surgeon in December to discuss which is best. Thereafter she will have radiation; which also still needs to be discussed.

“Being young and having one child, fertility was something I needed to discuss with my oncologist and with her being experienced she knew what the options were and the process involved and referred me to a reproductive medicine specialist in our first consultation. She went on to explain that chemotherapy could damage my fertility.

Knowing that we may not be able to have more children made us really sad; it was a shock. We fell pregnant without really trying and had a beautifully easy pregnancy so to hear that chemo would cause infertility was heart-breaking.”

Within two days, Jody and Ari were in consultation with a reproductive medicine specialist. “The next day a blood test and a scan of my egg reserve was done to see what they were working with and to decide what hormone therapy I would go on. Next, the plan of action for getting the eggs to the right point for retrieval, fertilisation, genetic testing and freezing was discussed,” she explains

“Our decision was immediate.” Jody explains, “My husband and I never wanted just one child (I’m one of three; my sisters are my best friends so it was always important to have more children) and knowing that by the time I would be done with treatment, I’ll be a lot older, this was our insurance policy should we not be able to fall pregnant naturally afterwards.”

Since Jody had to start chemo quite soon (10 August), she had her first hormone injection the next day. She explains, “Ari injected the hormones in me on a daily basis for the next seven days until my next scan and blood test.

I continued on the same prescribed hormone treatment until my next scan that was done two days later. Ari had a blood test the same day. The hormone treatment changed as we were approaching extraction date. On 9 August, I was admitted into theatre and my eggs were retrieved. When I woke up I had a sticker on my hand indicating that they managed to retrieve 12 eggs. The total timeline from the first scan to extraction took 14 days.

The twelve eggs were fertilised with Ari’s sperm. Of these 12 eggs, five embryos developed. These embryos were tested genetically, of which two tested abnormal. So, three genetically normal embryos were frozen for future use.”

The couple were fortunate enough to get a portion of their fertility treatment covered by the Malka Ella Fertility Fund, a Jewish organisation, as both are Jewish.

“All blood tests were covered by our medical aid day-to-day savings and thankfully the clinic we used provide oncology patients with a subsidised rate.