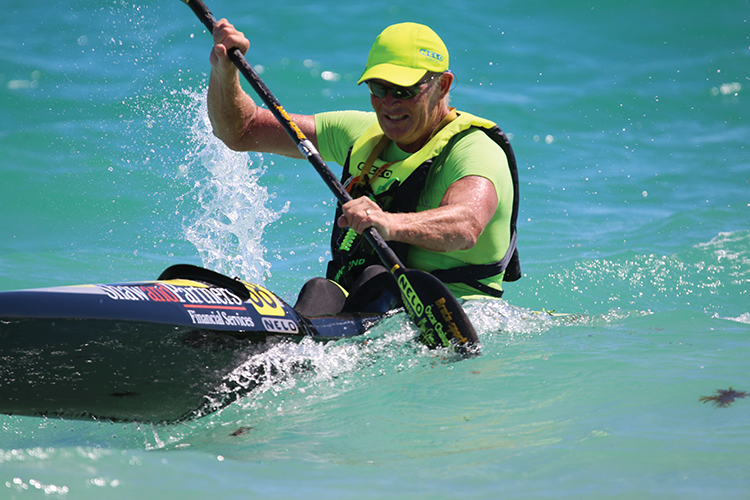 Oscar Chalupsky (58) and his wife, Clare, alternate living in South Africa and Portugal. They have two adult children, Luke and Hannah.

Success in the sports world started early for Oscar. He started competing internationally at age 14; made the National Surf Lifesaving Team at age 15; was the first person in the world to win both Junior and Senior Ironman, aged 15; played for KwaZulu-Natal Schools’ Rugby and SA Schools’ Water polo. He became the youngest canoe Springbok, at age 18, and was the Captain of the first SA Paddling Olympic Team in 1992. He went on to win the World Surfski Champs in Hawaii seven years in a row and then won it on another five occasions, the last being, in 2012. Oscar won his last international race at age 55. And, it doesn’t stop there, currently he coaches and travels to most of the races around the world. Plus, the 58-year-old still competes, even after a multiple myeloma (MM) diagnosis.

In 2019, Oscar experienced excruciating back pain. “I couldn’t sit or sleep. I paddled and exercised around it and still paddled in an international Surfski race in Australia. On returning to Portugal, I had an MRI. In November, the medical team diagnosed me with a tumour pushing against my spinal column. I was informed that the tumour was secondary cancer and the primary cancer could be a number of different types.”

Even though medical treatment is free in Porto, Portugal, Oscar came back to SA for treatment on the advice of the doctor that it was better to be where most of his family live, for the support.

Oscar was due to have a biopsy in December. “Fortunately, half an hour before the biopsy, after various tests I was diagnosed with multiple myeloma. I had been receiving morphine for the pain,” he explains.

“At first I never knew what multiple myeloma was all about. I thought it might be a quick thing and I could get back to racing, training and working. I never get disheartened but was told that treatment will be for nearly a year and will be on-going as this cancer was incurable.”

Oscar’s initial treatment was 10 days of radiation to shrink the tumour. Thankfully, once these were completed, he was pain free. A number of bone marrow biopsies were done throughout his treatment cycle and a full MRI of his whole body was done to check his skeletal structure.

Four months after the sportsman completed his high-dose chemo, he was prescribed lenalidomide (an immunomodulating oral tablet).

He adds, “It’s a 10mg pill which I take 21 days on and 7 days off. I will take it for the rest of my life if the cancer doesn’t work it out.” Thankfully, Oscar’s medical aid covered all of his treatment costs in SA.

“After the stem cell transplant, I could only walk for 800m then had to rest for the remainder of the day. I kept increasing the walk till I could walk up to 10-12km, that took about two to three months. I started to paddle the Miller’s Run six months after my treatment ended, but no racing but only competed in my first proper race in May 2021, in Portugal, where I won my age group. However, I’m still not very strong.”

Since treatment, Oscar goes for check-ups every three months, which includes a blood test to check his markers.

When asked whether he is living a good quality life, the sportsman responds, “Yes, I’m doing as well as I can. I would rate myself at 75% of my capacity. I still experience back pain and an overall feeling of stiffness. Knowing I have a non-curable disease, I’m always concerned if the multiple myeloma is in check and if the pills are working. I also think about how long I will live for. With that said, I’m 100%  living beyond my cancer, sometimes I don’t even realise or think that I have cancer which can be a good or bad thing. I’m back to training and preparing to race the Fish River Canoe Marathon in SA as well as the World Surfski Championship in Spain.