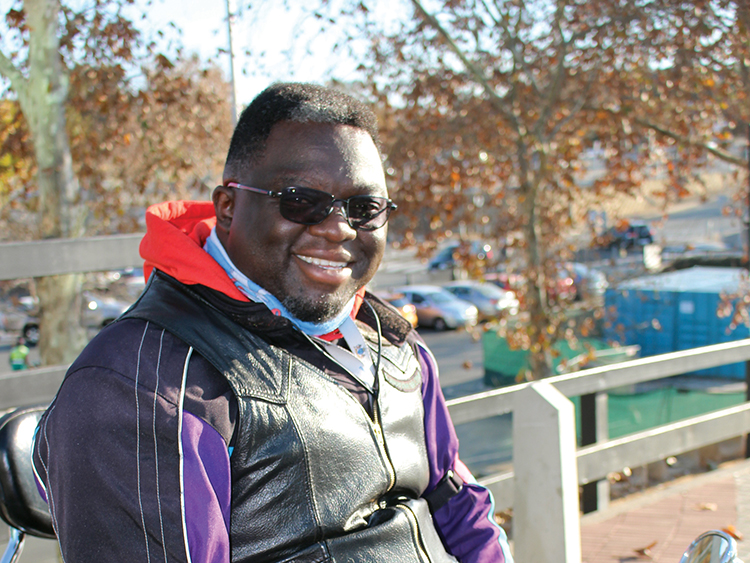 Thami Tshabalala, a Hodgkin’s lymphoma survivor, tells us more about his treatment journey and his love for bikes.

In 2017, Thami had a persistent cough. “I went to the chemist and self-medicated as I don’t like going to doctors,” he explains. “However, it didn’t help so I got something else; that also didn’t help so I decided to go to the doctor.”

By this time, Thami had lost weight, was itchy all over his body, had swollen glands under his armpits and was experiencing fatigue.

A chest X-ray showed that Thami had growths on his chest cavity and he was referred to Chris Hani Baragwanath Academic Hospital. Here, Thami underwent a CT scan, biopsies of the lumps under his armpits as well as a bone marrow test. The results confirmed he had Hodgkin’s lymphoma (HL), a cancer of part of the immune system called the lymphatic system.

“I didn’t know much about cancer, I only knew of breast and prostate cancer. I had never heard of Hodgkin’s lymphoma. When I heard the news, I immediately thought I was going to die and was scared. It was only when a friend of mine, who works in the medical field, told me that the majority of patients with HL survive, that I was hopeful,” Thami explains.

In April, Thami underwent chemotherapy for six months. Unfortunately, Thami had to be hospitalised for a week during treatment due to boils developing on his body. He was given antibiotics and they healed. Besides that, Thami was able to go to work the days after his chemotherapy sessions and only suffered nausea.

In November, after the six-months of chemo, Thami’s doctor wasn’t happy with the shrinkage of the tumours so she prescribed high-dose chemotherapy with stem cell rescue (autologous stem cell transplant). Thami was in isolation for three weeks while undergoing the high-dose chemo. The first four days he was given chemo for eight hours a day, then on the fifth day, his harvested stem cells were infused back into his body and he was monitored for the rest of the two weeks.

The autologous stem cell transplant was a success in that Thami’s immune system recovered well. However, his doctor was still not satisfied with the final results and applied for him to be on a trial of new medication.

“To be part of the trial, a new CT-, PET scan and bone marrow test had to be done and sent in as part of the criteria. When that new CT scan came out, it showed that the cancer was gone, and I didn’t need further treatment,” Thami explains.

Since then Thami has gone for his check-ups and all has been good.

Thami’s interest in motorcycles started in 2003 when he watched American Chopper, a reality TV show about building and customising motorcycles. In 2014, Thami bought his first bike, a Kawasaki VN classic 900 and joined Batsumi Motorcycle Club. “Most of my support during my cancer treatment came from these guys,” Thami adds.

In late 2017, Thami bought a new bike, a Yamaha XV 1900 and after Thami completed treatment, he was invited by a friend to join a Cancervive (a cancer awareness and education project of People Living with Cancer) event. The flagship event is an annual 10-day motorcycle ride across SA, where the group educates communities along the way. Thami became a Cancervive member and took part in the 2018 and 2019 annual motorcycle rides.

“It’s so important to educate people staying in the rural areas, like we did, because the black community in these areas still don’t speak about cancer and hide it if they have it as it’s seen as bewitching or a curse.” He also adds that men need to stop being stubborn. “I was one of those stubborn men who didn’t want to seek medical help. So, I urge men to just go for a health check-up once a year.”

Go back to the Big C Survivor's Guide