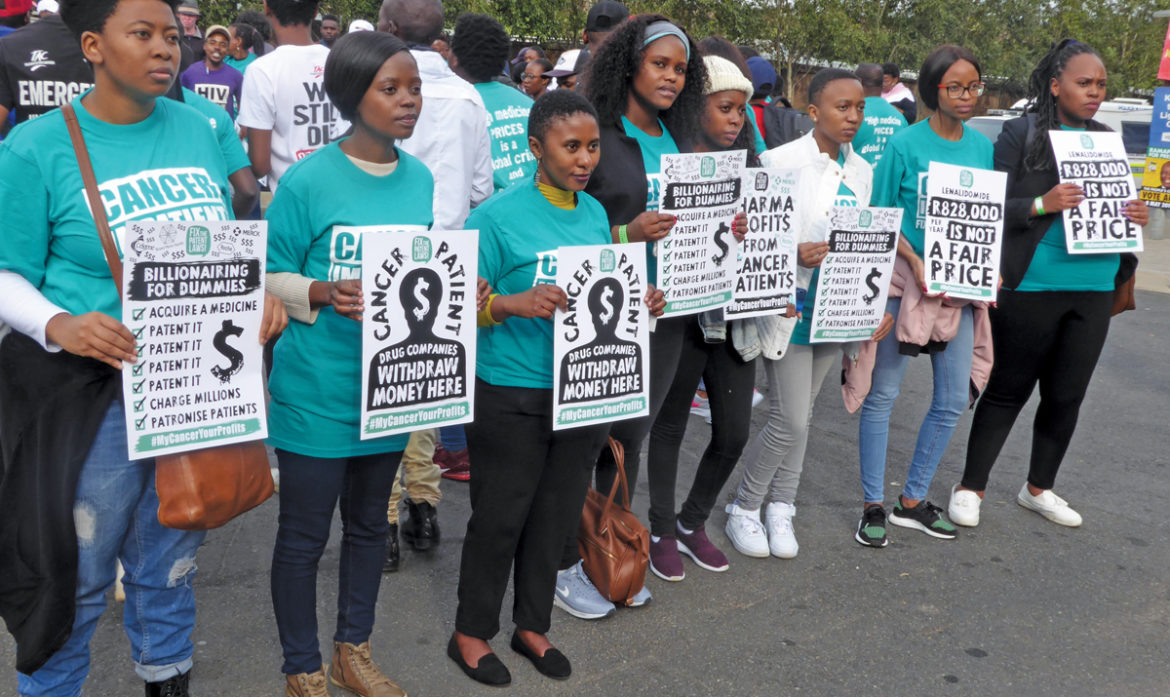 Salomé Meyer informs us of the recent picket held outside the WHO Fair Pricing Forum at Emperors Palace, Gauteng.

“Cancer is the new HIV!” is how Mark Heywood, former executive director of Section27, described the cancer crisis in SA at the Civil Society Stakeholder meeting arranged between Cancer Alliance and Treatment Action Campaign (TAC), in April.

The reality is with the successful treatment of people living with HIV, many are now living longer than expected and are facing co-morbidities, such as cancer.

At this meeting, it was agreed that Cancer Alliance, TAC, Section27 and organised labour will fight to ensure that cancer becomes a recognised priority of the National Department of Health (NDOH) after the elections. In the same way it was done for HIV after the 2009 elections.

A recent technical report of the WHO on pricing of cancer medicines provides some insights into arguments used by industry in determining pricing for cancer medicines, such as research and development (R&D) costs1.

The Fair Pricing Forum thus also focused on the issue of transparency in R&D with the Italian resolution that served at the 72nd World Health Assembly meeting. South Africa is co-sponsoring this resolution.

Affordability and availability remains key aspects when lobbying for equitable cancer medicines. An article in Jan/Feb 2019 Buddies For Life described the focus on trastuzumab.

Now, lenalidomide, used for the treatment of multiple myeloma, is the second medicine that is receiving attention by Cancer Alliance.

One month’s treatment will set you back nearly R69 000, whilst a generic version of the same medicine will cost you less than R5 000. “It’s criminal” is how Precious Matsoso, Director General of NDOH, describes this price difference.

Patients accessed generics products through Section 21 authorisation. This was until, in 2016, when the Celgene originator product was registered by South African Health Products Regulatory Authority (SAHPRA). Thus, effectively adding an unaffordable price tag to a life-saving medicine.

Patients in the public sector can’t access this medicine and must revert to thalidomide, where it’s approved by the Pharmaceutical Therapeutic Committee of a treatment centre.

The NDOH at the Essential Medicine List (EML) meeting, of March 2019, didn’t approve thalidomide for inclusion on the national EML due to cost reasons.

Picket at WHO Fair Pricing Forum

The WHO Fair Pricing Forum meeting, held at Emperors Palace, was the perfect setting to focus the attention of SA and the world on affordable cancer medicines and, specifically, lenalidomide.

A picket arranged, by TAC and Cancer Alliance, for the start of the Fair Pricing Forum was not approved by the authorities as Emperors Palace as private property didn’t allow for such a peaceful demonstration.

Amidst the heavy presence of police vehicles and security, the peaceful demonstration by some 350 activists in green CancerImpatients T-shirts and bold placards with wording, such as #MyCancerYourProfits and #MyCancerYour $$$ went ahead at the back entrance for staff.

We, however, made our mark as WHO and a representative of the NDOH received the Global Civil Society Fair Pricing statement. We demanded that we be allowed to read this as well as the demand from the SA group at the opening session.

Whilst we were denied access, we succeeded in being inside and part of the official proceeding being allowed to read out the Fair Pricing statement.

This memorandum demands for the following:

Salomé Meyer is: the project manager for: Access to Medicine campaign and Advocates for Breast Cancer (ABC); an independent cancer advocate; and an EXCO member of Cancer Alliance.