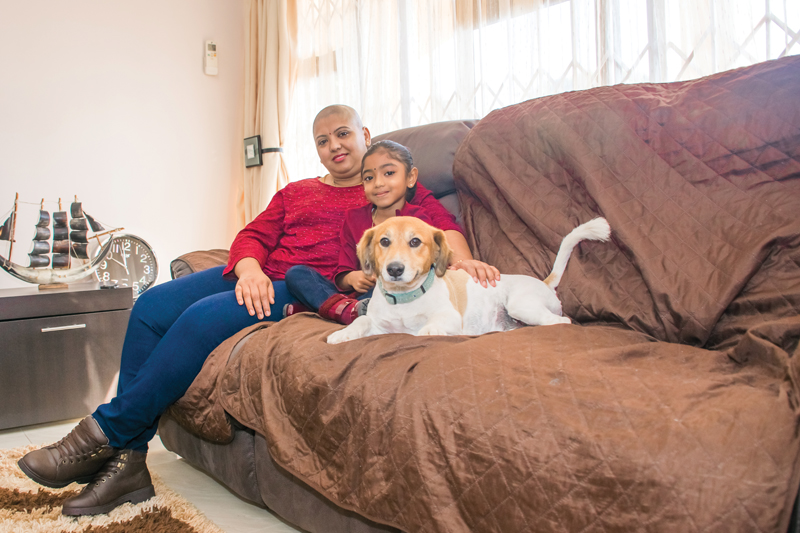 My Diya and Stitch – Pragashnee Pillay

Pragashnee Pillay shares how getting a dog for her daughter, Diya, helped both her and her daughter cope with her cancer diagnoses and treatments.

Pragashnee Pillay (35) lives in Tongaat, Kwa-Zulu Natal with her husband, Terence, and their five-year-old daughter, Diya, and their pet Jack Russell, Stitch.

A month before Pragashnee was diagnosed with thyroid cancer, in April 2017, her daughter, Diya, asked for a baby brother. Unfortunately, that was not on the cards as Pragashnee hadn’t been feeling well for some time.

“I told her that I am currently unwell and will not be able to give her a baby brother now. But, I assured her once Mummy gets better, I would give her a sibling. She was very sad,” Pragashnee says.

Pragashnee underwent a total thyroidectomy. Thereafter, she had radioactive iodine therapy. Eight weeks later, she was put on levothyroxine oral tablets. She then had monthly follow-ups with her oncologist.

During this time, Diya didn’t understand why her mother wasn’t her usual self and why she couldn’t have a baby sibling.

“Diya was very sad so I decided to cheer her up and get her a male puppy as she was more inclined to wanting a brother. I needed a pet for my little princess with whom she could bond and play. We got Stitch, in June 2017, when he was just six weeks old. My sister gave him to us as a gift for Diya. Boy oh boy, did Stitch fit in perfectly! He grew up in Diya’s pram and was often seen on the trampoline with her. He made such an impact on our family,” Pragashnee says.

“My hubby and I made an alphabetical list with all the names we could possibly think of for the new addition to our family. But, the day he arrived, Diya took one look at him, gave him a hug and said his name is going to be Stitch. Stitch, by the way, was not one of our suggested names,” she adds.

“My husband and I wanted another child, not only because Diya asked but because we wanted to expand our family. So, a year after my thyroid cancer diagnosis, my oncologist sent me for a full body scan to get the all clear to start planning for a baby.

However, that was not to be. Three months later, in July 2018, Pragashnee was diagnosed with acute promyelocytic leukaemia. She explains, “This was the toughest for all of us as I had to be in isolation, in hospital, from July to December. I received 18 high-dose rounds of chemotherapy, where I was in hospital for a month then two weeks at home, then back to hospital for the next round.”

“Currently, I’m doing my two-year maintenance phase treatment at home. I take oral chemo tablets (Versanoid, Purinetol and Methotrexate) which has similar side effects to IV chemo. I go for monthly blood tests and follow-ups with my haematologist. Every six months, I get a bone marrow biopsy done.”

Unfortunately, Diya didn’t handle her mom being sick again very well. “My little princess was a cauldron of mixed emotions. She was hurt, sad, confused, and angry with me when I left her to go to hospital. She became withdrawn and emotional when I was not around her. I used to video call a lot but Diya, at times, did not want to even speak to me. That was the hardest!” says the mother.

“Coming home to my daughter was the motivation that kept me going. I would always explain to her the reason I was in hospital and that I’m going to get better and stronger just to be with her again. If it hadn’t been for my husband, mum, brothers and sisters who showered her with unconditional love and support, I don’t know what I would have done.”

“As difficult as it was, due to her being so little, she understood as time went on. I figured this out when she got a cold. She stood far away and told me that she can’t come near me as she needs me to get better soon. How sweet and considerate of her!”

The young mother says the most difficult part was leaving Diya to go back to hospital a few days later for another round of chemo.

“I still remember how she would sit behind the door and just cry uncontrollably, not saying a word. This shattered me. Seeing her like this broke my heart into a million pieces.”

Accepting there would be no other sibling

Before Pragashnee started her high-dose chemotherapy, her haematologist explained what was to happen treatment-wise as well as side effects. “He said due to me taking such strong chemotherapy, there could be damage to other organs, and I wouldn’t be able to have another child.”

“I had a lot of mixed emotions, I was resentful and upset. I had to deal with being diagnosed with leukaemia and being told I won’t be able to have another child. It felt like everything came crushing down all at once. It’s like a game of trade. I had to trade not having another child so that I could beat leukaemia to live with my little princess, Diya.”

Then Pragashnee had the difficult task of explaining this to Diya. “She was going to be five years old, but all her baby stuff, e.g. cot, pram, car seat, walking ring, etc. had been kept aside for another child. To my surprise, she told us, ‘It’s okay, you don’t need to worry as Stitch is my baby brother.’ By this time, they were inseparable. She spent almost all her time playing with him.”

As a mother, Pragashnee is so grateful that Stitch was in Diya’s life while she underwent treatment. “Stitch has always been there for her. He acts like a real brother because he is so protective over her. No one can carry her, chase her, or even shout at her. In my absence, she has formed an even stronger bond with him. When she’s with him, her mind is occupied doing fun things and not worrying about me not being around her so much.”

When asked how Stitch has played a role in Pragashnee’s treatment, she replies, “In my eyes, Stitch is a human being. He is my son and is a part of our family. There’s never a dull moment with him around and he lights up every room with his bubbly, unpredictable, crazy personality.”

“The funny tricks that he does and the way he barks as if he’s talking to me just makes my day. Stitch has been there for Diya when I couldn’t be…to play and make her laugh. This has helped her grow stronger and has helped give me the strength to fight towards getting better.”

“I can confidently say that the bond between an animal and human is emotional, physical and psychological. The kind in a sense that both, human and pet, benefit for the betterment of one’s well-being in life.”

“Sometimes I feel I don’t need to go look at the ocean to decrease my stress levels. Instead I look into Stitch’s eyes; the amount of love and gratitude I see is simply priceless. Stitch has left paw prints in both our hearts and for that I am thankful for my ‘son’, Stitch.” 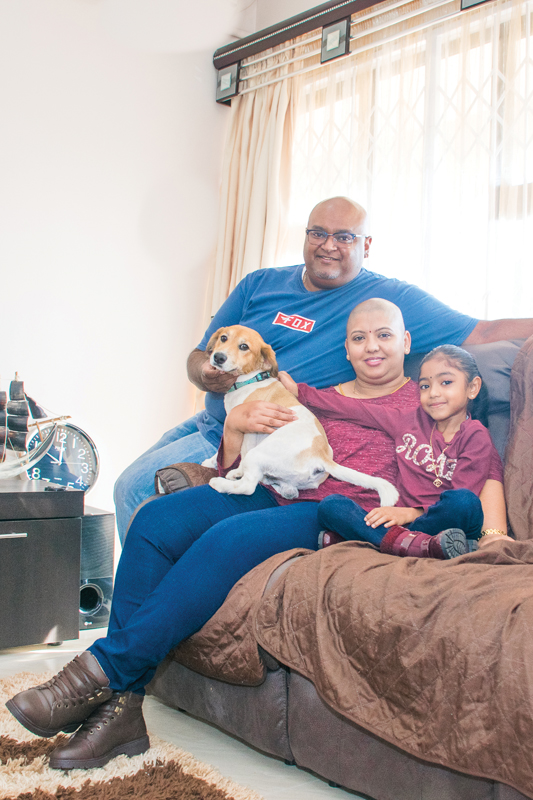 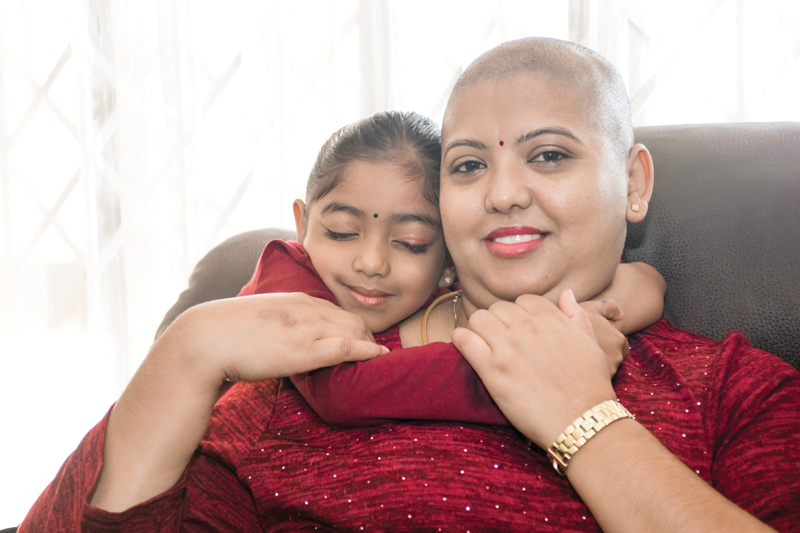