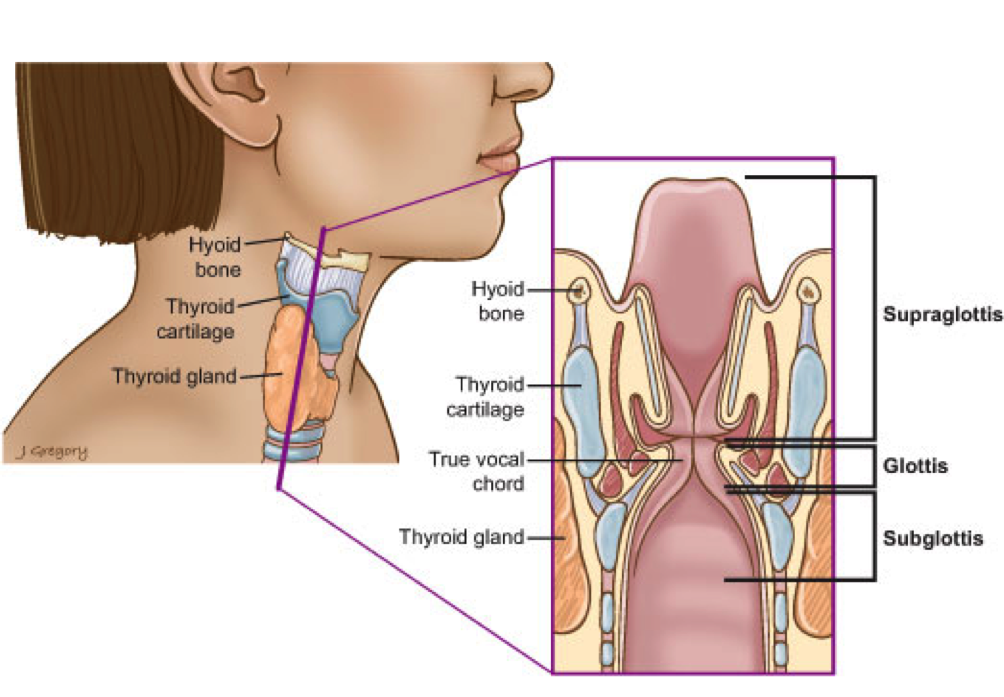 Laryngeal cancer is a type of throat cancer that affects your larynx (voice box). The larynx contains cartilage and muscles that enable you to talk and prevents food from entering the lungs. This type of cancer can damage your voice.

The larynx is divided in three parts (see below):

Laryngeal cancer is diagnosed predominantly in men. The most common carcinogens are:

Depending on the staging, laryngeal cancer is divided in early and late stage cancer. The goal in treatment is to cure (if possible), restore and/or preserve a patient’s voice and to prevent the cancer from recurring. Treatment options include (one or a combination): surgery, radiation and chemotherapy.

Currently the gold standard is laser surgery (where the tumour is removed through the mouth with the aid of a microscope and a CO2 laser), with open surgery and robotic surgery being utilised in specific cases. Robotic surgery is a modality gaining more popularity but is regarded as expensive and still in the infant stage.

Radiation involves directing high-energy beams of particles at the cancerous growth. These particles are aimed to damage the DNA of the cancer cells. Radiation is often the primary treatment for people with early-stage laryngeal cancer

Late stage cancer is referred to Stage III and IV. The current consensus is to make the decision on trying to spare the larynx or not. This entails either removing the whole larynx through a procedure, called a total laryngectomy (a person needs to learn to talk again with assistance), with radiation after surgery. Chemotherapy is sometimes given in combination with radiation. This approach is called chemoradiation. It can be used alone in an attempt to spare a person’s voice.

The prognosis refers to the outcome and chance of curing a patient. This is also influenced by certain factors related to the cancer and the person being diagnosed with cancer.

Dr Johann Kluge MBChB (UP), MMed (ENT) (UP) is a head and neck surgeon at Life Groenkloof Hospital as well as one of the consultants, Department of General Surgery, University of Pretoria. He completed a two-year fellowship, in 2016, with the International Federation of Head and Neck Oncologic Societies under Professor Jatin Shah.