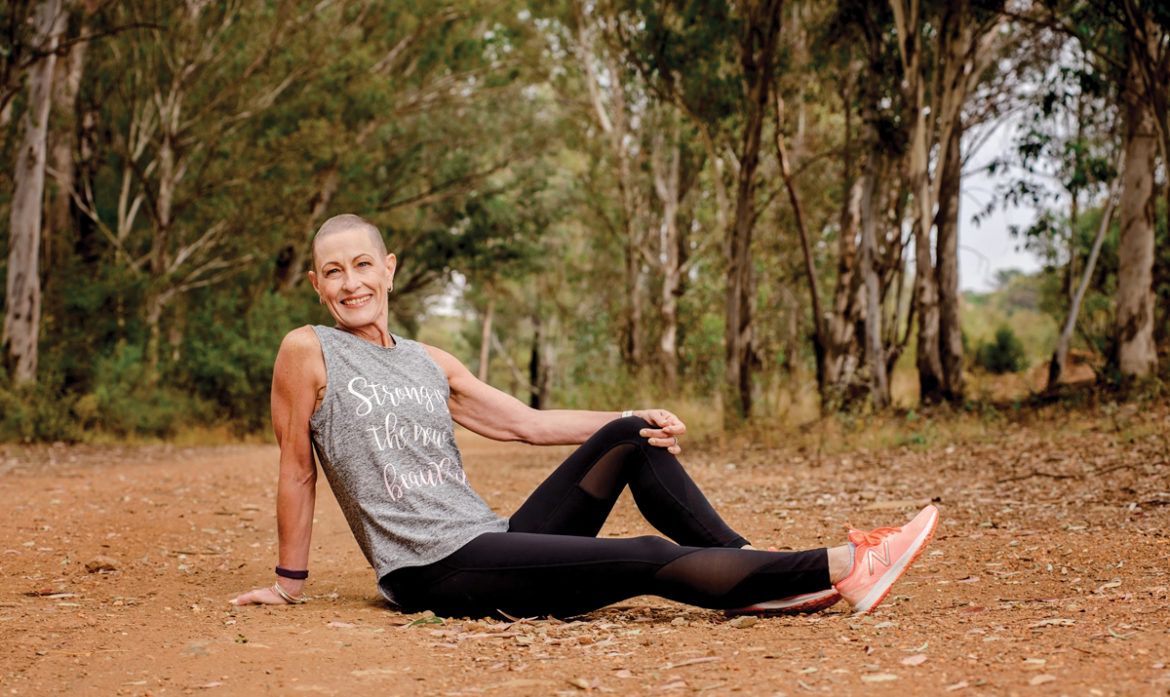 This is how I fight my battles – Adri De Bruin

Adri De Bruin tells us why strong is the new beautiful, especially when you are diagnosed with non-Hodgkin’s lymphoma.

Adri De Bruin (56) lives with her husband, Jan, in Mulbarton, Gauteng. They have an adult son, who lives in Australia.

The year 2017 was an extremely difficult year for Adri. Her mom was ill, she had Alzheimer’s, and after a series of complications she passed away in October. Then in November, Adri’s brother-in-law also passed away. At the time, Adri told her sister she felt like someone was strangling her as she was experiencing extreme pressure around her neck.

Adri went to the clinic, on the campus where she works, and was told that her thyroid was so enlarged she had to go see a doctor immediately. Numerous tests were done: scans – including a full body MRI; blood tests, and a fine needle aspiration (FNA) of the mass in her throat. All the results pointed to non-Hodgkin’s lymphoma in her neck and the gland underneath her rib. The diagnosis was made within a week that December.

The diagnosis came as a huge blow to Adri. “I am extremely fit. I have always been health conscious – eating the right foods and living a healthy life. It really took me by surprise. My siblings suffer with thyroid problems and my son, Ryan, was diagnosed Hashimoto’s disease in 2014. But I never had any health issues.” Adri says.

Adri’s chemotherapy treatment – which included the ‘red devil’ – was meant to start in January 2018. But  Adri asked if it could start in December so, by the time she needed to be back at work, she would have already had two treatments.

“The oncology nurses were so compassionate. They were never without a smile. They told me not to  call it the ‘red devil’, but rather the ‘red angel’, even though it looks far from an angel. My oncologist was so thorough and answered and explained everything   in so much detail. They were all so amazing,” Adri says tearfully.

Adri’s oncologist is very happy with the treatment results, and this past July Adri started her maintenance chemo plan (every 12 weeks until her next check-up in March). This treatment is designed to help the primary treatment succeed. However, her medical aid declined covering the cost of the maintenance treatment.

Because Adri has continued  exercising and kept up her fitness, her oncologist feels it has aided her treatment and recovery. “There are many people who stop living. But it is better to get off the couch, than staying on the couch,” Adri says.

The side effects that Adri experienced is dry itchy skin, sore fingers and feet, and her hair fell out three weeks into chemotherapy. But she adds that she managed it easily. Since diagnosis, she changed her diet to a low-carb, no sugar diet. Though, she admits she still craves sugar, but knows it is better not to have it. Plus, if she does have a piece of cake, she might land up eating the whole thing.

During treatment, she lost roughly 7kg but is gaining it back slowly. She thinks the weight loss is due to the treatment and the change in diet.

The day after Adri’s first chemo, she was doing the parkrun, and has never missed a parkrun while on chemo. “On the days I wasn’t feeling well, I didn’t run but walked,” she says. To date, Adri has run over 200 parkruns. “I really enjoy it. Just to be with other people – the comradery and the supporters. It’s great! I mean after my hair fell out, the guys at Rietvlei parkrun shaved their heads in support.”

Adri met two other cancer survivors  at the Rietvlei parkrun and they have become the closest of friends. “You run next to people, then you start talking and hear their stories and you become friends,” she explains.

Adri also plays basketball (she has played ever since she was a child) and has also never missed a practise during chemotheray treatment. Her exercise schedule is choc-o-block. Tuesday is basketball practise; Thursday is yoga; Saturday is the parkrun; and Sunday, Adri does a trail run, if she feels up to it.

In sickness and health

Jan, Adri’s husband, has played the biggest   role in her support structure. “He went to every doctor’s appointment and chemo session with me. He even sits with me during the maintenance chemo. I think it is good for him so he can see and understand what I am going through,” Adri says.

Jan has even supported her by adopting her diet as much as he can. “During the week, he does try to eat the same as me but he still has his chocolate whenever he feels like it. I don’t expect him to just stop,” she adds.

Ryan, their son, wanted to come to SA when he heard the news, but Adri told him not to. “He had just started a new job and I wasn’t physically sick. We skyped every week just to keep Ryan updated on my progress. He is coming to SA to visit this December.”

Support is number one

Adri adds that the support system of a cancer patient is very important. “The support I received from my husband, family, friends and colleagues was great. They constantly phoned or messaged to see how I was doing. I would have my moments of weakness, but I say you can have one moment a day. I have had mine already (referring to when she cried speaking about the oncology staff),” Adri explains. She also says   that thinking positively does help.

A jewellery ring that Adri bought has inspired her. It reads: ‘My journey isn’t over yet.’ She believes  it’s such a strong message. “This is it. It’s not going to end in one   day. You have to keep fighting.” 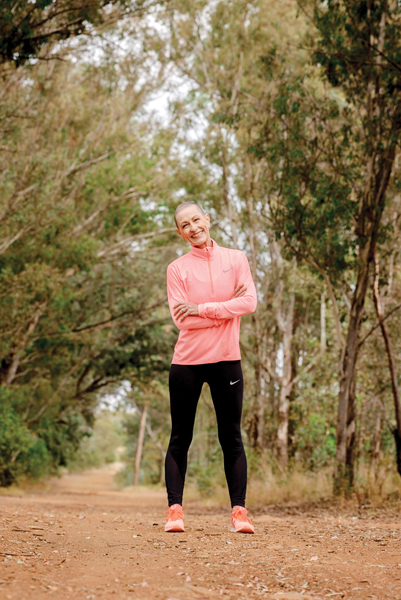 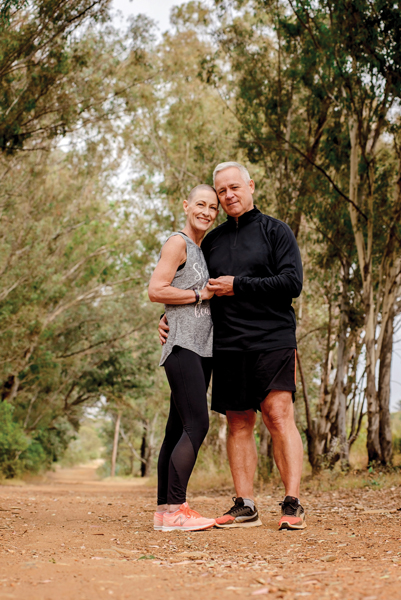 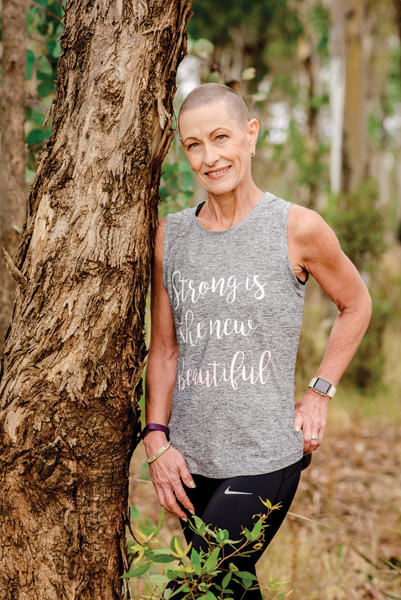 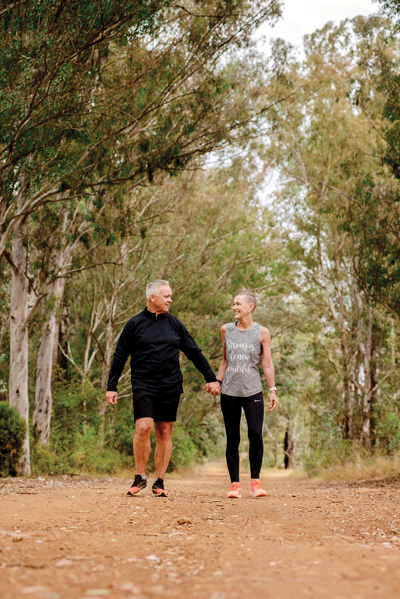 Make-up by Kirsten – Make Up Artist

Laurelle Williams is the editor at Word for Word Media. She graduated from AFDA with a Bachelor of Arts Honours degree in Live Performance. She has a love for storytelling and sharing emotions through the power of words. Her aim is to educate, encourage and most of all show there is always hope. editor@buddiesforlife.co.za