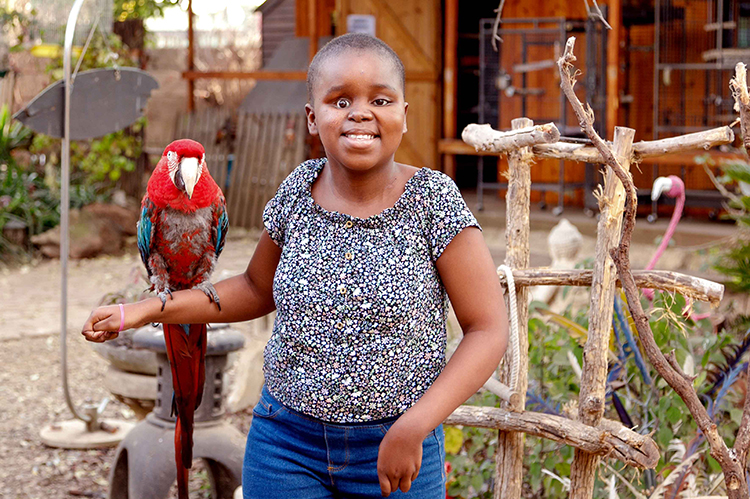 Zino Nyangule is the sweetest and most inspirational 14-year-old cancer survivor. Despite being blind, her take on life is extraordinary.

When Zino was around eight months old, her mother, Zuzeka, noticed that when she shook a toy on the left side of Zino, Zino would follow it with her eyes but when she shook it on the right side, Zino didn’t. “There was also something on her right eye; at night, it would shine like a cat’s eye,” Zuzeka explains.

Zuzeka took Zino to an eye specialist who then referred her to St John Eye Hospital at Chris Hani Baragwanath Academic Hospital (CHBAH). After testing, Zino was diagnosed with retinoblastoma, an eye cancer that begins in the retina, and is most common in children.

It was also found that Zino had a germline mutation, which is a gene change in the body’s reproductive cell (egg or sperm) that becomes incorporated into the DNA of every cell in the body of the offspring. Germline mutations are passed on from parents to offspring.

Unfortunately, this news caused upset on both sides of the family. “Our families were against us, saying that this was due to culture customs and said many things that discouraged us,” Zuzeka says.

The doctors explained that in order to stop the cancer from spreading, Zino’s eyes would need to be enucleated (surgically removed) leaving her blind. Since this was a hard decision to make, the doctors gave the parents time to decide.

“It was such a difficult time as we had no support from our families and Zino’s right eye was getting bigger and blood and pus started to come out. That is when we decided to go ahead with the surgery,” Zuzeka explains.

Enucleation of the eyes

At 10-months-old, Zino’s eyes were enucleated. Naturally, Zuzeka was anxious about raising a blind child so asked the doctors to help prepare her. “They took me

to a blind man who works in the hospital. Strange enough, I had seen him that morning crossing the road with a stick. He shared his story with me and I was motivated by hearing that he works and uses public transport to get around. I asked him, ‘But how do you know when the taxi is near your house?’ and he explained that he knows he needs to get off once the taxi goes over three humps. He gave me so much hope. He explained that Zino’s other senses will get stronger to compensate for the loss of her sight. After speaking to him, I knew that my child had a future and I was confident to face the world with my baby.”

When Zino was 12-months-old, she underwent six cycles of chemotherapy as well as radiation. Once treatment was finished, Zino was referred to an oculist who specialises in ocular prostheses (artificial eyes).

“The oculist took photos of my husband’s and my eyes and made artificial eyes for Zino that looked similar to ours,” the mother explains.

Zino could have gotten artificial eyes for free at St John Eye Hospital but Zuzeka explains that they were not happy with the look of them and wanted Zino to look as natural as possible. Thankfully, the doctor has been kind enough to give a discount to the family. “Though, it’s still expensive,” Zuzeka adds.

The oncology social workers and doctors were a great help by advising schools for Zino to attend, assisting with disability grants and general support.

Zino started at Johannesburg Hospital School, where both blind and autistic children attended. “As she was getting older, we noticed that she wasn’t learning to talk properly. The school also informed us that she needs to go to a school that is better suited for her needs. Zino has been attended boarding school at Prinshof School for the Visually Impaired in Pretoria since Grade 1.”

Zino is currently in Grade 8 and loves school. Her favourite subject is Afrikaans and she would like to be a teacher or physiotherapist or an educational psychologist when she is older.

In August 2019, a car bumped Zino’s leg at her sister’s wedding. “I didn’t fall as it wasn’t that hard,” Zino says. But, in November Zino experienced pain and by March 2020, her leg was extremely swollen and painful that she couldn’t walk.

After seeing a GP and being referred to an orthopaedic surgeon, a biopsy was needed. However, due to COVID being rife, this was delayed and only occurred in September. The result showed that the retinoblastoma was back.

“Since Zino had been treated at CHBAH before, we made the decision to go back there for treatment and the orthopaedic surgeon worked with them,” Zuzeka explains.

In November 2020, Zino started seven cycles of chemotherapy which was completed in June. Thankfully, after the first session, she was pain-free and could walk, jump, and kneel down.

Zino is currently undergoing radiation at Steve Biko Academic Hospital. Zino also had stem cells harvested and once she has completed radiation, the doctors will assess the next step to her therapy.

Zino learnt about Kids Kicking Cancer, an organisation dedicated to lowering the pain of children through the teaching of martial arts as a therapy, when she went for her annual check-ups at CHBAH before her recurrence. “I tried it and I liked it a lot. So, when I started chemo again, Sensei Moses asked if I wanted to join. At first, I was in too much pain to join but by the second chemo I could join, and continued to join in every time I was at the hospital for a check-up. It was so nice and helps take away my stress and makes me calm and taught me not to be scared of chemo,” Zeno explains.

The 14-year-old loves animals, especially birds. She had two African Grey Parrots, Moley and Poley, and taught them how to talk and sing. “These parrots were semi-skilled, not like others where they just copy you when you talk. So, you need to have a special way to teach them, which I did,” Zino says. Unfortunately, Poley flew away two years ago and Moley passed away recently but Zino hopes to get more pet parrots.

Sweet Zino is a true inspiration and encourages other children to not skip a treatment, even though they may have side effects. She plays an active role in her treatment, asking the doctors to explain all processes of her treatment before it gets administered, and advocates for other children and teenagers to ask too.