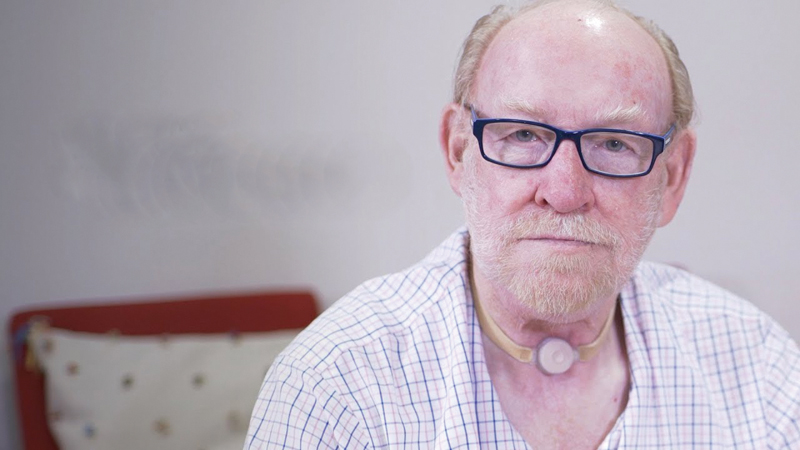 Dr Chris Joseph, an ear, nose and throat surgeon, outlines what a laryngectomy surgical procedure entails, when it is needed and the effects of it.

The function of the larynx

The larynx functions as a valve to prevent food and liquids from entering the trachea and lungs during swallowing. It’s also necessary for normal voice and speech as it houses the voice box.

Its cartilaginous framework or “Adams Apple” can be seen and felt in the neck.

When and why is a laryngectomy needed?

Laryngeal cancer may also be treated with radiation, or combined chemotherapy and radiation. Surgery may then be reserved for failed radiation or a later recurrence.

The major risk factors for cancer of the larynx are smoking and alcohol consumption, or both together. The human papillomavirus (HPV) may also be a predisposing factor in some cases.

A delay of more than six weeks from diagnosis to the start of radiation results in poorer outcomes for these patients. Therefore, surgery is performed where possible.

This technique reduces hospitalisation time and results in a shorter recovery period for patients. Most patients can swallow and speak immediately.

Both partial laryngectomy and radiation preserve speech in treated patients. Speech can be hoarse or strained in these patients due to treatment. Many have very good speech outcomes. Speech quality after transoral laser resection depends mostly on the extent of resection.

Total laryngectomy results in a permanent tracheostoma (opening in the trachea) for breathing, and a loss of speech.

The tracheostoma should be covered most of the time, to assist heat and moisture exchange and prevent dust or foreign body inhalation.

This is achieved by regurgitating swallowed air. Therapy is started when tissues have healed post-surgery. It has the advantage of not requiring any prosthetic assistance. Sentence length depends on the volume of air swallowed. It may take  a few months of rehabilitation therapy to achieve good speech. Ongoing therapy isn’t required once good speech has been achieved.

Currently, this is the preferred mode of post-laryngectomy voice rehabilitation. The valve may be inserted at the laryngectomy surgery and the patient is usually able to speak on leaving hospital. It requires little therapy in most cases, but uses an expensive prosthetic valve which needs replacement every nine to 18 months in most patients. The valve is replaced under local anaesthetic.

The valve is placed in a fistula that is created between the trachea and the oesophagus. Air from the lungs is diverted through the valve into the oesophagus to enable speech. The speech quality is usually good and sentence length will depend on the volume of air expelled from the lungs.

The patient closes the tracheostoma with a finger (an external hands free valve is also available) to divert air into the oesophagus.

The valve has a one-way mechanism that prevents food and liquids from entering the trachea on swallowing. Daily cleaning with a small valve brush is required to remove mucus and maintain good function.

This is rarely used as it produces a metallic unnatural sound. Voice projection is also weak. The patient holds the device against the throat below the jaw. On activation, it produces a monotonous vibration sound that enables speech.

Dr Chris Joseph is an ear, nose and throat surgeon practising at Morningside MediClinic, Gauteng. He is the current president of the South African Head and Neck Oncology Society.