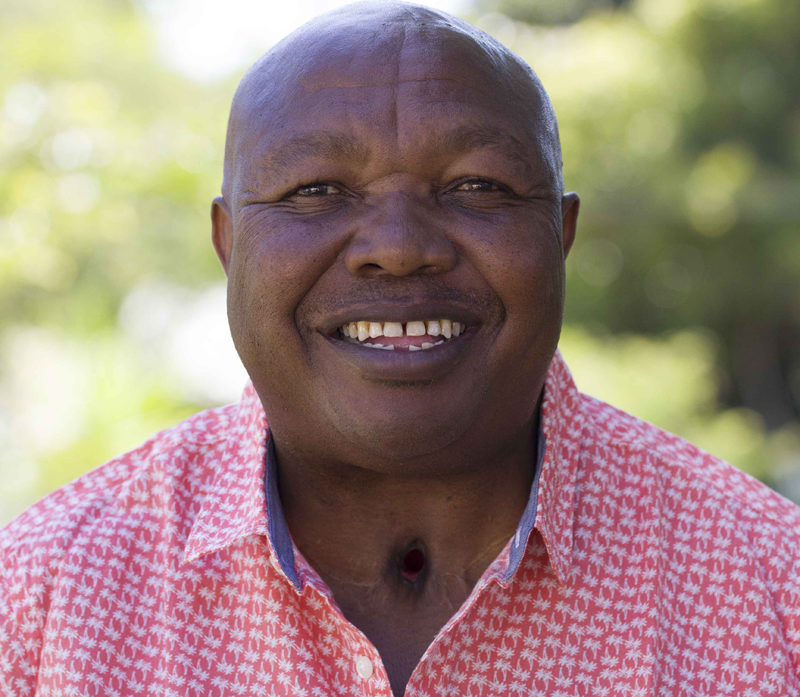 Andrew Hunter – I still have a voice

Andrew Hunter tells us about life after a laryngectomy: how he learnt to communicate with a tracheoesophageal voice prosthesis and recently via oesophageal speech.

Andrew Hunter (59) lives in Soweto, Gauteng. He is divorced and has two adult children.

In 2012, Andrew who had been smoking for over 20 years and drank occasionally on weekends, started to develop flu-like symptoms. His voice became croaky and deterioratedand his throat was dry and painful. He went to see a doctor who referred him to Chris Hani Baragwanath Academic Hospital.

After numerous tests, including a biopsy, Andrew was diagnosed with cancer of the larynx (Stage 3). He was informed that he would need to undergo a total laryngectomy (removal of the larynx that houses the vocal cords). “I was shown pictures of what will be done to me and how I would look after surgery. A patient who had a laryngectomy spoke to me before surgery. I was told that a speech therapist would help me speak after surgery,” Andrew explains.

Undergoing such an operation can only be daunting, though Andrew explains that he knew he needed help and he didn’t want the cancer to spread so he made the brave decision to go ahead with the laryngectomy in May.

After surgery, Andrew couldn’t speak at all. “Even though I was told I wouldn’t be able to speak, that first day was a challenge. I could hear and see people and wanted to respond but I couldn’t. Plus, when I tried to talk, it was extremely painful.”

For 10 days, Andrew couldn’t eat orally and was fed via a Foley catheter. Once he had a swallow X-ray and was given the go-ahead, only then he could eat orally.

Once Andrew’s two-week recovery was over, his rehabilitation with a speech therapist began. “Before I could start speech therapy, I had to be able to say ‘Hello’. Once I could say this, after much practise, then

I was declared fit enough to start therapy,” Andrew says.

It was decided that Andrew would make use of a tracheoesophageal voice prosthesis. This is a small one-way valve that passes air from the windpipe to the food pipe upwards, allowing vibrations which are shaped into speech sounds at the mouth. The valve further prevents food and liquid from entering the lungs.

With Andrew’s determination, he could speak within two months with the help of a speech valve and his team of speech therapists. He was also taught how to care for the valve and how to monitor the integrity of the speech.

Andrew says his family has accepted his new way of communication. “Though, they tell me not to talk as they don’t want me to experience pain but I tell them there is no pain when I talk. I just have a hoarse-sounding voice now. Though, sometimes, I get out of breath (Andrew breathes from the stoma) and need to rest if I talk too much,” he explains.

He adds that he isn’t embarrassed of the way he looks or talks. “If someone wants to see the hole in my neck, I show them.”

Andrew communicated with a tracheoesophageal voice prosthesis for seven years. But last year, he had issues with the fistula (a connection between the windpipe and food pipe) that the valve was fitted into; blood was coming through. So, while waiting for another valve to be inserted (measurements are taken for a valve to fit) and with the fistula closing, Andrew found that he could communicate by forcing air through the food pipe. This is called oesophageal speech.

This method is normally difficult as patients don’t get enough air to communicate audible, but Andrew managed to.

After a discussion with his ear, nose and throat (ENT) specialist and speech therapist, it was decided that Andrew should rather use this method then undergo another surgery of having the fistula re-created for another speech valve to be inserted.

Andrew is communicating well with this method. It’s only in the morning, once he wakes up that he struggles. As he jokes, “It takes a while to warm up.”

Regarding hygiene, Andrew wears a laryngectomy bib and wipes his stoma when bathing.

Since having the surgery, Andrew can’t be around smokers and is sensitive to the smell of petrol and strong chemicals. “I start to cough immediately and I also can’t go to places with loud music as no one will be able to hear me. I also can’t go swimming or shower as water can’t go in the stoma.”

Changes in taste was a major side effect that Andrew suffered but he says it slowly came back. He stopped drinking alcohol and now advises others to stop as well.

It’s common for people who’ve had a laryngectomy to suffer with acid reflux. So, Andrew was advised to avoid food that would cause reflux, and was prescribed medication.

To this day, Andrew still attends the laryngectomy support group held at Chris Hani Hospital every month. It’s not compulsory but recommended as it has a dual purpose: support and monitoring.

Each person’s voicing and swallowing functions are checked. Stomas are assessed for new occurrences, and the integrity of a speech valve is checked, using a blue dye swallowing assessment, to see if there is leakage. If the valve needs to be replaced, the speech therapist changes it. This is the only speech therapy department in the Gauteng province where speech therapists are trained to do this procedure.

The group also offers support by allowing patients to socialise with each other to offer encouragement. Guest speakers are invited to speak at the meetings too.

The 59-year-old is often called to counsel newly diagnosed patients. “I encourage them and show them that it’s easy to talk after surgery. But, sadly, you do get people who can’t accept it and land up drinking themselves to death,” says Andrew.

The Chris Hani Laryngectomy Support Group is doing extremely well with patients being very active. Two years ago, the patients indicated they want to develop video resources to educate newly diagnosed patients. The group recently finished compiling the content and are now waiting for sponsorship for the videos to be edited professionally.