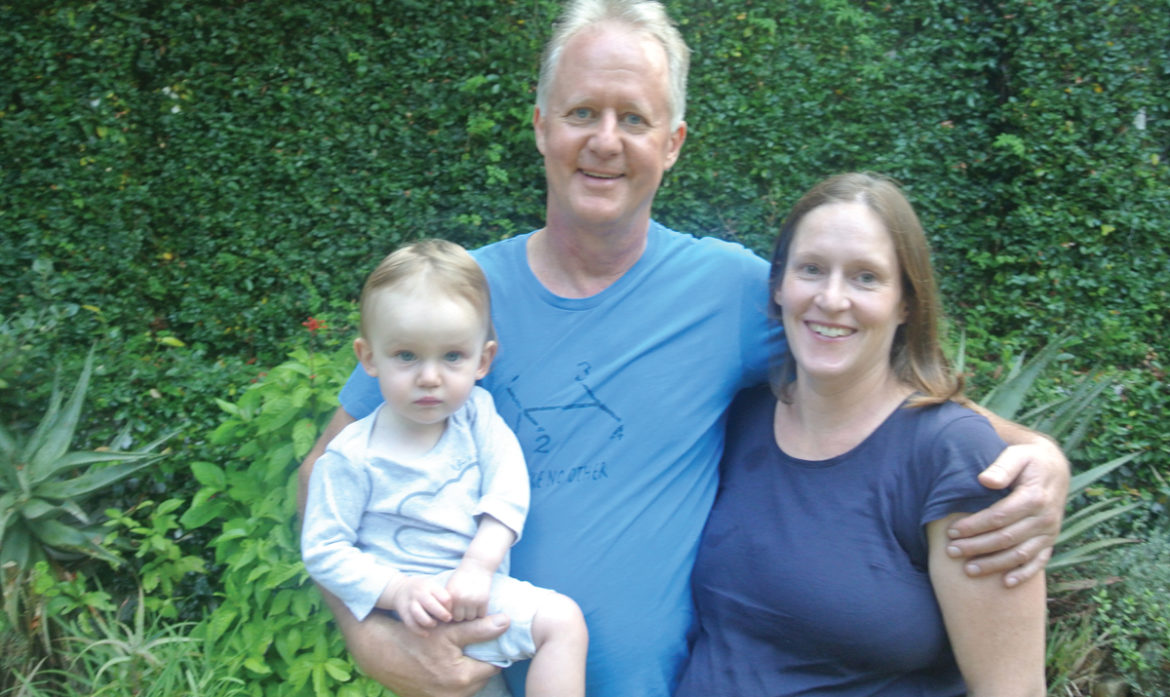 Prostate cancer survivor, James Howard, tells us how freezing his sperm before his prostatectomy  allowed him and his fiancé, Gayle de Hoog, to become parents.

James (59) and Gayle (41) live in Newlands, Cape Town with their son, Luke (14 months). Gayle is currently pregnant with twins.

When James was diagnosed with prostate cancer in December 2014, he and Gayle had just rekindled their relationship after a 16-year break. Gayle was living in the UK and had come over to SA for a holiday. She arranged to fly back to SA to care for him for a few weeks post treatment. After his treatment, James took a sabbatical and went to the UK to recover under Gayle’s care. A year later, Gayle moved to SA and their new chapter of starting a family commenced.

Since 2009, James had been treated for an enlarged prostate. For five years, James went for regular check-ups and annual biopsies. From 2012, he was put on medication to help him cope with retained urine as his prostate was so large it interfered with urination.

“I battled to understand why, when the outcome of an enlarged prostate at a younger age could lead to prostate cancer, why it should not be removed immediately? I was told it couldn’t be removed before it was actually cancer, as the post-operative issues one has to deal with are major and life-changing,” says James.

Though, in the end James still underwent those major life-changes as he was diagnosed with prostate cancer and underwent a full prostatectomy (removal of prostate).

James was given two treatment options: brachytherapy, a type of radiation therapy, where radiation pellets are implanted into the prostate, or a full prostatectomy.

It was also explained that with the removal of the prostate and seminal vessels, James wouldn’t have the ability to ejaculate semen anymore (though he would be able to have an orgasm), and may suffer with erectile dysfunction and incontinence, either short-term or long-term. “No guarantees or chances could be ascribed upfront. It depends on conditions and luck and as my urologist said to me, ‘I’m setting out to remove the cancer. The rest is a secondary concern.’ However, he assured me that he’ll always be as careful as possible to preserve all nerves and organs there,” James explains.

Given his younger age (54), a prostatectomy was recommended.

It was decided to remove James’ prostate via his abdomen. Though, due to James having two hernia repairs, the surgeon was unable to get past a massive adhesion in his lower abdominal area and had to immediately close him up and stop the operation. The following month, James was successfully operated on, by another surgeon, and his prostate was removed via his perineum (area between the anus and the scrotum).

It was Gayle who suggested that James freeze his sperm before the operation in March 2015. “While I was not immediately ready for children, as I was still very focused on my career, I knew that I wanted to have children at some point. James had already told me that he wanted to have kids,” Gayle explains.

James admits he hadn’t even thought of freezing his sperm. “I was too busy dealing with the reality of having prostate cancer and how it pushed all my masculinity buttons hard, scaring the living daylights out of me…not being able to make babies; a very good chance of not having erections again; and wearing nappies for the rest of my life. But we both wanted to have children so

I banked some of my sperm three weeks before the first operation. I did two sessions of deposits. I ensured that over that period of collection,

I hadn’t had caffeine or alcohol for two weeks before I started. It wasn’t a huge volume, but it made 22 straws. That is 20 chances of IVF. I was told my sperm were very active and in great condition. That proved itselfas we have our lovely little boy, Luke, and the twins on the way!”

Road to having a baby

In October 2016, James and Gayle started the process of in vitro fertilisation (IVF) (where the female’s eggs are collected from her ovaries and fertilised in the laboratory with sperm. After a few days, the fertilised eggs (embryos) are transferred to the female patient’s womb to develop and grow). This route was chosen, oppose to artificial insemination(IUI) (where the man’s best sperm is introduced into the woman’s uterus through a soft plastic catheter), as it was found that Gayle’s anti-Müllerian hormone (AMH) was ‘almost undetectable’, so the chances of IUI being a success were low.

After the third attempt of IVF, it was a success and nine months later, James and Gayle became parents. “When I first saw Luke, it was amazing, like a miracle, life-changing as to one’s lifestyle and attitude. As well as making you aware, for the first time, what responsibility and joy is…all at the same time,” James says.

Gayle says, “I’ll never forget the day Luke was born. I was so excited after he was born that I couldn’t sleep for almost 24 hours after the birth! That first cuddle and being able to touch and kiss the little being that has been growing inside of me was magical. I never knew that I could love so fiercely. Being able to watch Luke grow and learn has been an amazing journey. Your perspective on life certainly changes – for the good!”

James believes there is and always will be stigma around men and infertility. He goes on to explain, “If men can understand that firstly prostate cancer is a killer, and if they have support and are well-informed, they can easily get their minds to change a gear and say to themselves: ‘I’d rather fix this and deal with the consequences as soon as possible, than hang about thinking about it, or because I am scared or uncertain and die!’”

Seeing James share his story makes Gayle very proud. “Infertility has a big stigma attached to it, I think especially for men. The stigma also occurs in women, and a lot of women don’t understand it but I feel more women are able to confide in their friends than men are. A close friend of ours has recently been diagnosed with prostate cancer. It has been really reassuring for him, to be able to speak to James honestly so that he knows what to expect during treatment and the post-operative changes. He asked James whatever questions he wanted to and James was happy to oblige. This may not always be possible in a doctor-patient relationship due to time constraints. And, although a doctor is far more knowledgeable on the topic, first-hand experience is just as valuable.”

Dealing with the side effects

James had an ‘anti-testosterone’ injection in between the two surgeries, but the side effects were still very much in place when he stayed with Gayle in the UK. These included hot flushes and low mood. Plus, the incontinence he experienced resulted in deep depression. “At times, it was a bit difficult living with these side effects as James was not the positive man I knew him to be. His incontinence disturbed him greatly. His urologist told him that he didn’t suspect he would suffer badly with it. But it turned out that he did, due to the urethra valve having become lazy during the period he had the enlarged prostate. I knew he felt disappointed with this, but

I must say I didn’t fully understand how he felt, until I had had my first baby! Fortunately, James diligently did the pelvic exercises he had been given, by his urologist, and three weeks into his sabbatical he found that he no longer suffered incontinence,” Gayle says.

“The ongoing issue with James’ treatment is the sexual dysfunction that comes with a radical prostactectomy. While James can get an erection, it’s by no ways as it used to be. There are options available to deal with this, and I have asked James to consult his urologist. I remember the urologist saying that it’s often the women who have more of an issue with the sexual dysfunction than the men. Nonetheless, James and Gayle are happy, thankful and excited to welcome their twins and plan to get married in the next year.

Laurelle Williams is the Editor at Word for Word Media. She graduated from AFDA with a Bachelor of Arts Honours degree in Live Performance. She has a love for storytelling and sharing emotions through the power of words. Her aim is to educate, encourage and most of all show there is always hope. editor@buddiesforlife.co.za