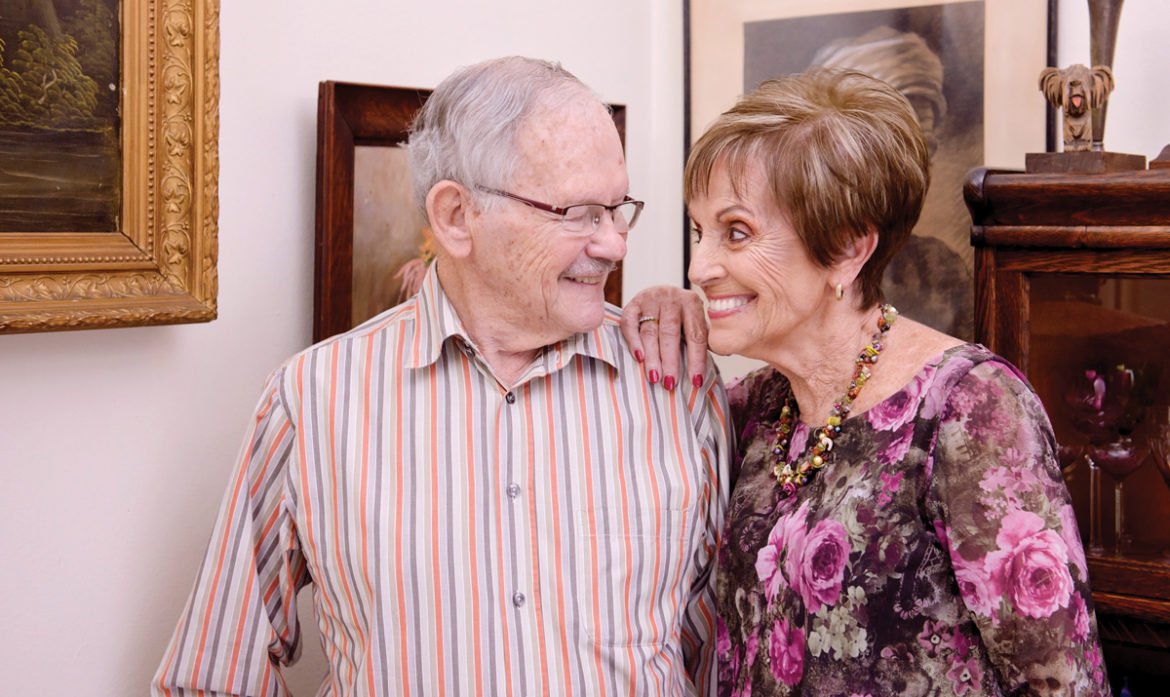 Love of a very rare find – David and Beulah Jankelowitz

We speak to married couple, David and Beulah Jankelowitz, about how their marriage survived a breast- and a prostate cancer diagnosis, and after 54 years is still going strong.

David (79) and Beulah (76) Jankelowitz live in Krugersdorp, Gauteng. They have three children and six grandchildren and will celebrate their emerald (55 years) wedding anniversary this July. It is hard to fathom that when  Beulah was diagnosed with lobular breast cancer in 1987, at the age of    45, she never knew a thing about the disease. Thirty-one years later, she is a walking breast cancer encyclopaedia, having been the chairperson for Reach for Recovery (RFR) JHB group; the national co-ordinator and PRO fundraiser for RFR South Africa for two terms; and she started a RFR support group on the West Rand, which she also chaired on three occasions. She explains, “The diagnosis came as quite a surprise. I did everything according to the book – had three children before I was thirty, breastfed them all, never smoked and never drank.”

She noticed an indentation above her right nipple and told David immediately and had no idea of who to go see – a GP or a gynaecologist? She then heard about a specialist surgeon. David accompanied her on the Thursday. After a mammogram, she was told she needed to be in hospital by Sunday. “Nowadays, they believe you can wait longer but back then you weren’t really given a choice,” she adds.

After a bit of bargaining, Beulah was only admitted on Monday. She signed permission for the whole breast to be removed if need be. However, when she woke up she was told a segmental mastectomy was done (today this is known as a lumpectomy) and 13 lymph glands were removed. The cancer was Stage 1 so only radiation was needed. The Jankelowitz’ recall the drive to Beulah’s radiation as a trek, as every  day for six weeks they drove from Krugersdorp to The Princess Hospital in Hillbrow and then back again.

Seventeen months later, Beulah noticed what felt like a grain of rice in the same breast. She had a mammogram booked two weeks later so told the doctor about it then; to which she was told she is ‘cancerphobic and it was nothing’. She then went to her surgeon. He thought it was likely to be necrotic (dead) tissue but ‘always goes on a woman’s gut feel’. A biopsy was done and it was confirmed it was a malignant multicentric spread of the whole breast.

A full mastectomy was performed with immediate reconstruction (tissue expander). However, because Beulah had radiation, her skin wasn’t pliable and couldn’t stretch. Thus she became an A cup from being a C cup. The left breast needed reducing for symmetry.

At first it did bother her as she says it never looked or felt like a real breast but thankfully David was fully supportive, telling her not to worry about the aesthetics but rather on being healthy.

Unfortunately, 16 years later Beulah experienced a rupture in the silicone breast implant and underwent plastic surgery again. A few years later after  the surgery, she suffered capsular contracture (internal scar tissue forms a constricting capsule around breast implant, contracting it until it becomes misshapen and hard), which resulted her in having another surgery, only this time with a saline breast implant. David has always been diligent with getting his prostate-specific antigen (PSA) levels checked. His levels were slowing rising but he was told that it was due to his age (the prostate was getting bigger so it was producing more prostatic hormones). A couple of biopsies and a local were done throughout this period. “It is most uncomfortable; they went through the rectum and the anaesthetic didn’t really numb it completely,” David explains.

However, his PSA levels then spiked from 5 to 9. After more intensive tests,  it was confirmed there was cancer at the base of the prostate. David says during this period, he did need to urinate more often but it didn’t worry him.

David wanted to have brachytherapy where radiation pellets are inserted into the tissue. But due to the position of the cancer, it was advised not to do this as it could affect the bladder. Thus, a radical prostatectomy (removal of the whole prostate) was performed in April 2011, when David was 72.

Unfortunately, there was a multitude of complications after the surgery due to David having Type 2 diabetes: his kidneys shut down and dialysis was needed, a blood transfusion was performed as he lost a lot of blood, he was admitted into ICU three times, and he needed insulin injections during this period as his sugar levels were so high. Currently, he is back on oral diabetes medication.

The news of having prostate cancer did not upset David, though after the operation when he wasn’t ‘shaping’,   this troubled him immensely. He had to learn how to be continent again; this took three months. He went to a continence specialist for six months,  who taught him how to hold his urine in, when needed, and exercises to strengthen his control. In the beginning, he recalls it to be terribly embarrassing as he would have many accidents.

Another complication that he experienced after the surgery was extreme pain in one of his legs. It was explained that it could be his psoas muscles due to his legs being stretched-out during the long surgery (what meant to be a three-hour surgery turned into a six-hour surgery). A cortisone injection was administered through X-ray plotting and the pain disappeared instantly.

A couple of months later, a similar pain was experienced in his other leg just in a different muscle. The same treatment was given, though this time the relief wasn’t instantaneous, it took three weeks.

Every three months David has to get his PSA levels checked. A year after the prostatectomy, David’s PSA levels started to rise again. The theory is, as David explains, is that not all the cancer cells were removed and are now on the left side of the pelvis. He underwent six weeks of radiation and the PSA level decreased to normal. However, a few months later, the PSA level rose again. Thus, in 2015, David was given Suprefact, a female hormone injection.

After one injection, the levels came down to 0,02 but then in a two- and-a-half-year time period they slowly rose again to 5. A second injection was administered four months ago which  has decreased the levels again.

There are other treatments available, however, David’s urologist is happy with how the injection is working. “He told me that I will die with prostate cancer but not from it,” David adds.

The 79-year-old dentist is one of the few men who can say they know what menopause is all about. He suffers with dreadful hot flushes caused from the injection. “I walk around with a packet of wet wipes to wipe myself down. They happen at random,” David explains.

As a wife, Beulah was perturbed when she heard her husband had prostate cancer. And, with technology today, she found herself googling everything that could go wrong. Thus, she worried a lot. Then while she cared for him during his long recovery process, he would wonder around at night which added to her stress. This took an emotional toll on her.

Once David got stronger and was doing better; she set a tea tray out for him and told him she was going out. “The helper was coming in so I knew he had someone if he needed anything but I just needed to get out. I had nowhere to go. I landed up going to the mall and walked around for three hours. It was my salvation…I just needed some respite,” she says.

A male caregiver also gave Beulah much needed rest by caring for David at night for a week. This allowed Beulah to get a good night’s rest every night.

Work was David’s escape when Beulah was ill. “I was home when I was needed, but when I went out, I went to work,” he explains. To this day, David still works part-time. “When I retired in 2002, I was bored stiff so I went back to work. I enjoy it,” David says.

With David’s mother having passed away from lung cancer (primary cancer was colon) and his father and brothers also having prostate cancer; their sons get their prostates checked regularly and their daughter goes for regular mammograms.

The secret to a long happy marriage

When asked this question, David chuckles and says, “I say yes to whatever Beulah says…and compromise of course.” Beulah says it was because David gave her wings and allowed her freedom to travel (with RFR) and do her thing. “It is because I can do these things that I come back.”

Just like any married couple, they have opposing views, such as on support groups. Beulah says it made a huge difference in her life hence why she got involved. Whereas, after David attended one meeting, he never went again. “I felt the conversation was very superficial…maybe if it was more in-depth I would’ve enjoyed it,” David says. Nonetheless, the two are each other’s pillars of strength and love each other dearly.