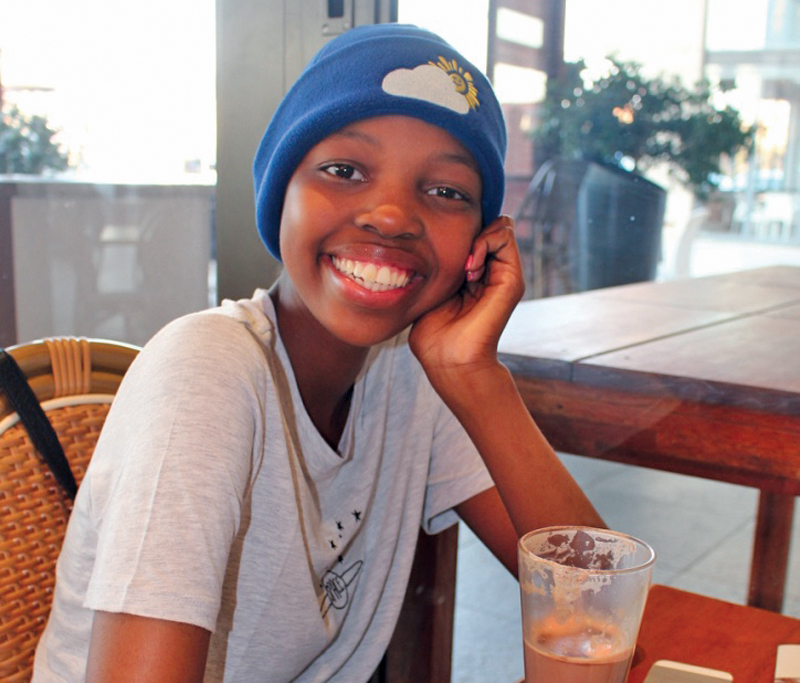 Lesedi Sekgololo tells us how Reach For A Dream Foundation made her dream of meeting celebrity chef, Siba, come true.

Lesedi Sekgololo (15) stays in Lonehill, Gauteng with her mother, Victoria, and her two younger sisters. She also has an older brother and her father is based abroad.

After numerous doctors’ appointments and even more misdiagnoses – stomach bug,       urinary tract infection, appendicitis, constipation, iron deficiency – with a doctor even asking Lesedi if she was anorexic, it was discovered that there was a mass growing between her right kidney and bladder. Seven months later and 15kg lighter, Lesedi was admitted to Chris Hani Baragwanath Hospital for surgery.

However, only a biopsy could be done as the mass couldn’t be removed due to it being too large. The biopsy results confirmed it was Ewing’s sarcoma. The symptoms that Lesedi experienced were nausea, vomiting, weight loss, lower back pain, abdominal back pain, loss  of appetite, constipation, difficulty urinating, blood in urine, and  insomnia, due to the pain.

Victoria vulnerably admits that at times, she did think her daughter was acting. “She is a drama student so I know she likes acting. We had moved to Polokwane for a year, which she wasn’t happy about so I thought now that we were back in JHB, she was playing up.   I would shout at her when she refused to go to school and for always sleeping. I was ready to take her to a psychologist,” Victoria recalls. The teenager confesses she started second guessing herself as well, wondering if she was just imagining her pain.

A port was inserted and six seven-day cycles of chemotherapy started.

During this time, Lesedi’s right kidney struggled to function. Unfortunately, the tumour didn’t shrink and in the second surgery in January this year, it was learned that the tumour is sitting on a vein connected to her right leg and if the vein was damaged, her leg would be paralysed. Next was thirty-one days of back-to-back radiation. Two cycles of maintenance chemo (lower doses), which she is still currently undergoing, is needed to ensure the cancer cells are dead. If the tumour has not shrunk by the next check-up, the plan will be to shave the mass away. Thankfully, the bubbly teenager is no longer in pain and has normal bowel movements.

Reach for a dream

While Lesedi was in hospital last year September, a representative from Reach For A Dream Foundation visited her to ask her what her three wishes are, saying they would try to make one of them come true. The teenager was encouraged to steer away from material items and to rather make a memory. Her three wishes were: to meet the South African chef Siba Mtongana; to have a family holiday in Zanzibar; and to go to America to visit her friend Jordyn. Yung Lesedi met Siba, in March this year, at The Palazzo Montecasino. She burst into tears when she saw the celebrity chef. The two sat and spoke in Siba’s hotel room. “Her husband, Brian, phoned while we were talking and he told her she must take pictures because he wanted to see what I looked like,” Lesedi says excitedly. “Siba then prayed with my mom and I. She gave my mom her number so we could stay in touch and a few days later she asked for my number and now we chat regularly on WhatsApp,” Lesedi explains. The 15-year-old was given a cooking set by the foundation and Siba gave her a signed copy of her cookbook.

Lesedi is happy to be back at school with her friends. She didn’t have to repeat Grade 8 as her marks were good so her school allowed her to go straight into Grade 9. She is glad her appetite is back as she can now cook up a storm in her mother’s kitchen and enjoy the food. She concludes, “It was my mom who kept me going, she would speak about the future when I couldn’t even see one.”

What is Ewing’s sarcoma soft tissue?

Ewing’s sarcoma, or Ewing sarcoma, is a rare disease in which cancer cells are found in the bone or in soft tissue. The most common areas in which it occurs are the pelvis, the femur, the tibia, the humerus, the ribs and clavicle (collar bone). It’s the second most common type of bone cancer in children, but it’s very rare. This type of cancer is rarely found in African-Americans and Asian-Americans, however, the racial incidence in SA is not known. It affects slightly more boys than girls and does not appear to be inherited. *Sourced from www.cansa.org.za