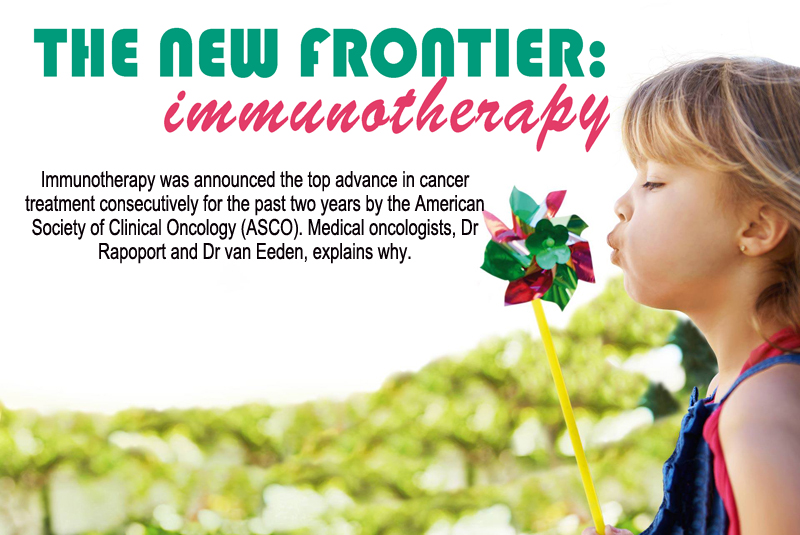 There are many different types of cancers, which previously had very dismal prognoses and bad outcomes, for which immunotherapy has changed the outlook of the future. It is fast becoming a new beacon of hope to many patients with advanced and aggressive cancers.

So far, it has been approved for treatment of melanoma, lung, renal   cell carcinoma, Hodgkin’s lymphoma, bladder cancer, head and neck cancers, and the list grows each day. Immunotherapy is also under investigation for treatment of triple-negative breast cancer, gastric cancer, Merkel cell cancer, soft tissue sarcomas, and pancreatic cancer amongst many other different cancer types.

It is important to note that this treatment is not always effective in  every single patient. For instance, in melanoma only about 40% of patients who are treated with immunotherapy will respond. However, when it does work, it works really well. The advantage of immunotherapy is that a longer overall survival has been achieved in some patients who are treated with these drugs. This means that patients live longer, with disease  not progressing or becoming worse for months or years, and, in some cases, even being cured.

What we have seen at our centre (The Medical Oncology Centre of Rosebank) is that some patients, where good responses are achieved, the responses are also durable – meaning that the drug continues to work long after it has been stopped.

In some patients who have received immunotherapy for Stage 4 melanoma, via an expanded access programme for ipilimumab for melanoma five years ago, have been completely cured, and are still well without relapse or recurrence after five years. These kind of results have never been seen before  in cancer therapy history.

Recently, this data (on the five-year survival of patients treated with ipilimumab in South Africa) was presented at the 2017 ASCO-SITC Clinical Immune-Oncology Symposium, and published in an international journal Journal of Global Oncology. It was shown that the South African population achieved similar results with melanoma to what is seen in the rest of the world. Our data of the treatment of nivolumab with lung cancer, also via an expanded access programme, was also presented. These results were also similar to responses seen in the rest of the world, as well as our experience of the different side effect profile of these drugs discussed later.

The response rates in lung cancer, for example, are much more than what we see with normal chemotherapy. It can also be used in patients that have never received any prior treatments, as well as in patients that have received chemotherapy before (termed first- and second-line treatment). Researchers are working extremely hard to determine upfront which patients are more likely to respond to the treatment, and to differentiate it from the patients who will not. There are certain tests that can be performed on the cancer itself, after a biopsy has been done, which helps to determine this.

In a recent big trial of first-line lung cancer treatment, it was proven that patients who have PD-L1 positivity (a biomarker on a tumour that binds to immune checkpoints) on their tumours, do better. However, immunotherapy can still be given even if this marker is absent.

In the normal body, the immune system is in place to recognise things that are foreign or dangerous to the body, such as infections or cancer. The immune system is designed that when there is such a threat, it activates a whole host of different mechanisms that allow it to fight and destroy the threat. Also, the body regulates the immune system so that it doesn’t destroy normal body tissues, and thus has ‘off switches’ or checkpoints (mainly CTLA-4 and PD-1). These checkpoints tell the body when to stop producing immune cells. Cancer is extremely clever, and knows how to either hide from the immune system, or find ways to keep it turned off. Immunotherapy blocks these checkpoints so that the immune system doesn’t get ‘switched off’. It uses the body’s own defence system to then overpower and attack cancer. Immunotherapy drugs can also block PD-L1, which was mentioned earlier.

Immunotherapy is a treatment that is well-tolerated by patients. However, what also needs to be understood is   that due to the mechanism of hyperactivation of the immune system, the side effects, known as immune-related adverse events, are vastly different from what has been seen previously with conventional chemotherapy and targeted therapy. The oncologist, who is treating the patient with immunotherapy, needs to be vigilant and knowledgeable of these new types of side effects. Although, most are generally mild and go away as fast as they appear; if they aren’t recognised early, the adverse events have the ability to be incredibly dangerous or even fatal.

Currently in South Africa, only ipilimumab is registered for use in patients with metastatic melanoma. The colossal problem with accessing this drug is that the cost is exorbitant (about R1 million – per four infusions required for treatment), and there are very few funders that are willing to pay. Of those who will pay, a co-payment is often expected from the patient, which still works out to be unaffordable amounts of money.

So how do South Africans get access to these drugs?

Alternatively, patients should enquire from their treating oncologists if there are clinical trials available (using immunotherapy drugs that are already registered for use in other countries and that have been proven to work) at their centre or other centres around the country.

Currently, trials are running for melanoma, lung cancer, gastric cancers and also other cancer types that have DNA abnormalities, called MSI high tumours. Note, only some cancer centres offer clinical trials programmes so patients should always enquire about the possibility of being referred to where they can gain access to these trials.

Another area of research is anti-tumour vaccines – which also stimulate the immune system to kill cancer. These vaccines are being looked at in combination with immunotherapy drugs or on their own. There are currently trials open and available for this as well.

There are numerous different immune checkpoints that still need to be elucidated; cancer immunotherapy is still at its infancy and is expected to grow and expand over the next few years as opposed to radiation and chemotherapy that has reached somewhat of a plateau.

The field of immunotherapy is rapidly growing, and patients and their families will benefit substantially in the years to come.