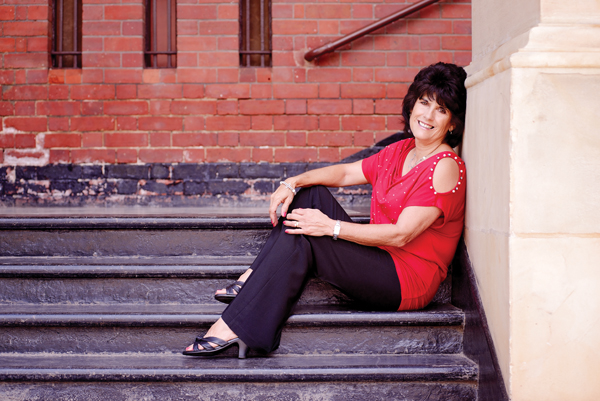 With brave wings she flies and laughs

Paula Robertson is loud, busy, constantly cracking jokes, and an excellent problem-solver; your typical Portuguese woman. After she was diagnosed with colon cancer, she vowed to never change her personality. In fact, her unique characteristics were only enhanced. She even saw the funny side of having a stoma bag, calling it Winnie the Pooh. The proud grandmother shares her story with us.

Paula Robertson (59) lives in Glenvista, JHB with her husband. She has two adult children and one granddaughter.

Doctors reckoned that Paula was living with the 11cm tumour for roughly eight to 10 years, without even knowing. It was only at the end of 2014 that Paula started to experience colic but when she went to the toilet, nothing came out. The colic continued and only two hours afterwards did her stomach eventually work, but her stools were hard and in the shape of little balls. This re-occurred two weeks later, and she decided to go to her GP. After a sonar; two weeks on antibiotics, and medicine to keep her stools soft; and a colonoscopy, it was confirmed, on Friday 29 January 2015, that she had colon cancer. The good news, however, was the tumour was above her rectum, meaning she wouldn’t have to live with a stoma (an artificial opening made into a hollow organ on the surface of the body leading to the gut) for the rest of her life. The tumour was causing a blockage, leaving only the diameter of  a finger for stools to come out.

The following Monday, she underwent a colostomy – a surgical procedure that brings a portion of the large intestine through the abdominal wall to carry faeces out of the body.

Being the typical Portuguese lady she is, she left lists and lists on the fridge explaining what her family needed to do while she was in hospital.

At first, Paula was shattered that she had to get a stoma bag, but realised she needed to be thankful for it. “I accepted it as part of my body and named it Winnie the Pooh (WTP). It would let  off gases, and I would say ‘it wasn’t me, it was WTP.’” It became a regular joke between her, her husband and family. When she was taking long to get ready (with changing the bag etc.), he would say, “I know it isn’t you, it is WTP”. Paula admits it was through this bantering that made it easy to cope  with having it.

The next five weeks consisted of chemo and radiation on the same day with the goal to shrink the tumour before removal. A 15% shrinkage was anticipated but remarkably there was a 30% shrinkage in total. She then underwent a proctosigmoidectomy (partial surgical excision of the rectum and sigmoid colon) in June, where the tumour and 30cm of her intestines were removed, as well as over 30 lymph nodes.

The months leading up to surgery, Paula was put on a special diet by a dietitian. She had to avoid fruit skins and pips, soya, chickpeas, lentils – anything that was hard to digest, and could get stuck and cause a blockage. She also kept away from food that gave her gases as well as fizzy drinks. She drank Rehidrat every second day to avoid dehydration, as she could only sip water. If she guzzled it down, it would just run straight into the bag, and her body wouldn’t absorb any.

Paula explained that initially (with the stoma), there was confusion when she needed the toilet. “You still get the same sensations you would, alerting you that you need the toilet…I was told to go sit on the toilet as usual, which I did – but it went into the bag.” Paula went on to describe how she would sit facing the toilet cistern, in order for the bag to be emptied in the toilet bowl, easily and without mess. She would have to change the stoma bag every day, and the stoma base once a week (which she was taught). Within a week, Paula was comfortable just standing in the shops and ‘doing her business’. Maternity clothes were Paula’s solution to the problem of finding comfy clothes to wear with the stoma bag.

At this time, Paula’s son was still living with them, but his wedding was planned to take place in December in Mauritius. Paula instructed him to leave the plans as is as she would be there to see him get married. “My oncologist was amazing as he assured me, ‘Don’t  worry Paula, we’ll get you there,’”  Paula said thankfully.

After her surgery, she had a port inserted in her chest for the pre-cautionary chemo FOLFOX. This type of chemo would be given intravenously at the hospital for three hours and then Paula would come home with a ‘chemo bubble’. Once the ‘chemo bubble’ was flat (empty) after two days, she would go back to the hospital to get it removed. As usual, Paula saw the humour in the situation and called this bag, Louis Vuitton. “This was a very expensive  bag – R8 000 for one bag!” she said.

The 12 treatments of FOLFOX, given every two weeks, were meant to be completed in six months, however, due to her getting colitis (inflammation of the inner lining of the colon), and having a low white blood cell count, and her trip to Mauritius, it took nearly a year. Paula’s chemo was temporarily stopped in October; only six treatments had been completed, and her stoma was reversed, leaving five weeks for her wound to heal before she jetted off to see her son get married. “They fulfilled my wish,” Paula  said tearfully.

The day after the stoma was reversed, Paula’s tummy worked. “You don’t know how nice it was to sit on the toilet…I was like a queen sitting on her throne…Everyday I sit on the toilet; I thank God that I can,” she said. At first she had to eat soft foods like jelly and custard, then slowly move to a normal diet. Today, she still avoids chickpeas and lentils as it causes her to experience colic.

Once Paula came back from Mauritius, the remaining six chemo treatments were completed. She never got colitis again – she thinks it was because the stoma was reversed. Even though she battled with many side effects of chemo, such as numbness in her feet and hands, tiredness, and lack of taste, she always searched for solutions to overcome them. She would wear woollen gloves to avoid the painful sensation she got when she touched cold things, she lived on toast and Cup of Soup when she couldn’t eat anything, and she would be so chuffed with herself if she managed to peel a potato, even if it took an hour long.

Currently, Paula goes for check-ups every three months, and an annual CAT scan.

Her port is still in – it should be removed

this year June – and it is back-washed every three months. Her children have been advised to go for yearly colonoscopies from the age of 35.

Before Paula embarked on this journey, she didn’t know what to expect from it, so in turn didn’t know what to pack in her little suitcase, but she knew she needed faith, hope and courage. And, that is what she took along with her. “God gave me strong boots to walk this road, but once I came to the end, He gave me comfortable sandals.”

One thought on “With brave wings she flies and laughs”