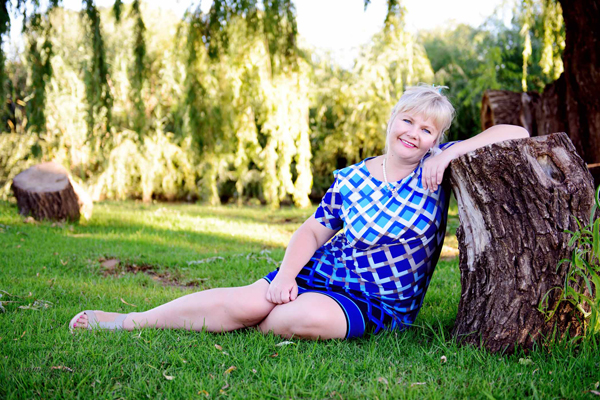 To celebrate her 10th year of being cancer-free this year, Zelka Spoja-Vieira is throwing a survivor themed party. She outwitted breast cancer, outlasted cervical cancer and outplayed everything life has thrown at her. The mother of two shares her story with us.

Zelka Spoja-Vieira (43) lives in Constantia Kloof, JHB. She is in the process of a divorce. She has two sons, aged 14 and 11.

At the age of 33, Zelka was going about her wife duties – cleaning house – when she felt a painful lump in her breast. “It was bizarre as I never had lumps,” she said. Due to it being December, most doctors’ rooms were closed, and trying to secure a mammogram deemed impossible. She decided to go on her planned family holiday, and set up an appointment the day after she arrived back home.

Zelka was diagnosed with HER2+ ER/PR- breast cancer that morning of the consultation; a pathologist was on hand to review the fine needle aspiration after the mammogram and sonar. “I knew something was amiss, the radiologist wouldn’t leave my side…she was an angel,” Zelka explained. It turned out that the radiologist was also fighting breast cancer at the time, and they are still friends today.

The only way Zelka can describe the way she felt when she received the news is a feeling of numbness, “You don’t really know how you feel; you’re not happy, you’re not sad, you are just numb.”

She then went straight to her GP, who had been her family doctor for the last 10 years, for advice. She told her GP that she was informed that she needed to make an appointment to have a mastectomy. Her GP explained she didn’t need to jump the gun, and arranged for Zelka to see a specialist breast surgeon that afternoon. Zelka acknowledges the favour she had that day.

A mastectomy was decided against as the lump was quite high up in the breast, so the treatment plan was to shrink the lump first because if a mastectomy was to be performed, the surgeon would have to cut quite deep into the chest, and it wouldn’t be aesthetically pleasing. This treatment plan proved successful; after eight sessions of chemotherapy (4 x ‘Red devil’, 4 x Taxol), the lump had shrunk ‘beautifully’, and a lumpectomy was performed as well as a nip and tuck of the breasts, followed by eight weeks of daily radiation, and finally a year on Herceptin treatment.

Zelka recalls her first chemo as a complete disaster. “I got sick instantly, suddenly I was depressed, I had a temperature of 42° and landed up in hospital, in isolation, with an infection. I was given antibiotics intravenously, and everyone who visited me, including the doctors and nurses had to wear masks. I wasn’t even allowed to eat fresh fruit or vegetables,” Zelka explained. Luckily, after that it got easier and she coped very well overall, taking anti-nausea medication.

Losing her hair was a certainty that Zelka had to face, so before she even started chemo she bought a wig, however, it was still such a brutal experience to endure. She explained, “Now you’re bald…now you look sick!” It was hard for her to lose her hair because it was so much a part of who she is. She loves styling her hair and always faffs over it. Her wig then became her object of attention, and even though it wasn’t the exact shade of her natural hair, she adapted it in so many ways. “I tried the scarf thing but I looked ridiculous. The downside of a wig is that it is very hot. I think I often stopped traffic by taking it off while driving.”

Since her children had been born, a couple of Zelka’s Pap smear results had been “bad”, and after the birth of her youngest son, she had to have a procedure to scrape the “bad cells”. She informed her medical team of this and they assured her breast and cervical cancer weren’t related, but that it was best to take care of her health. A year or so after the treatment, her surgeon introduced her to a gynae, who knew the breast cancer system.

A Pap smear was done and the gynae was not happy with the results at all, and got Zelka into theatre to do a biopsy. Numerous abnormal cells were found in the cervix; it wasn’t cancerous yet but the gynae didn’t want to take any chances and suggested she have a hysterectomy. Her cervix and uterus would then be closely examined.

Even though Zelka had wanted a little girl as her third child, she knew she was fortunate enough to already have two sons, so she agreed to have the hysterectomy, and honestly didn’t think she was dealing with anything serious. Though, when she was told her ovaries should also be removed, she outright said, “No, my marriage will not survive a second permanent bout of menopause.”

Several doctors voiced their concerns saying she was taking a risk as breast and ovarian cancer were related, and there was a chance that she could get a secondary cancer that was related to hormones. But, Zelka stuck to her guns saying, “This is my body and it is a risk I am willing to take.”

Zelka had her hysterectomy in December 2009, at the age of 35. Due to her always wanting a tummy tuck after her babies, she decided to have it at the same time. During the preparations, an umbilical hernia was also found, and this removal was added on to her list of operations. “I thought I was mighty clever at the time but little did I know what I was in store for!” Zelka said.

A week later, the lab results confirmed that Zelka indeed did have cervical cancer. Her cervix was cancerous and it was growing. It was only possible to detect once the cervix and uterus were removed, hence why the biopsy didn’t pick it up. “They caught it in the nick of time,” Zelka said. At that time, no subtyping info was available, but the histology confirmed the HPV changes.

This came as a relief for Zelka, but it didn’t change the fact that she was in the most indescribable pain after her “three-in-one” operation. “I have never felt pain like that before. Finding out I had cervical cancer was easy to deal with as I only knew after it was removed; I didn’t have to face a diagnosis or a discussion of treatment options, but that operation was worst then anything I have ever been through, so far!” Zelka said. No further treatment was needed for the cervical cancer, but annual Pap smears are still necessary. This didn’t make sense to Zelka, “But nothing is there, what are you going to
Pap?” It was explained that it is pre-cautionary in the case that some residue of the cancer cells were left behind. And so, the young mother of two survived two years of turmoil, but admitted, “None of this experience was marriage enhancing.”
Zelka went on to head up Bosom Buddies for several years and noted that it fed her soul. She then summited Mount Kilimanjaro in 2013, to raise money for the Breast Health Foundation, with a group named the Pink Peaks. This was Zelka’s “moment of glory” as she never believed she could do it, and then went on to prove herself wrong. “I was a couch potato, then lost 14kg during training, and then experienced the greatest moment of my life at the top of the mountain,” she said. She was actually the only breast cancer survivor from the group who managed to complete this momentous task.
Just like she celebrated her first year of survival with a Proudly South African themed party (Zelka had just been granted SA citizenship; she was born
in Croatia but grew up in Zambia), she is celebrating her 10th year with a survivor themed party, but the difference here is this is a party to rejoice the fact that she has survived everything…even a divorce!