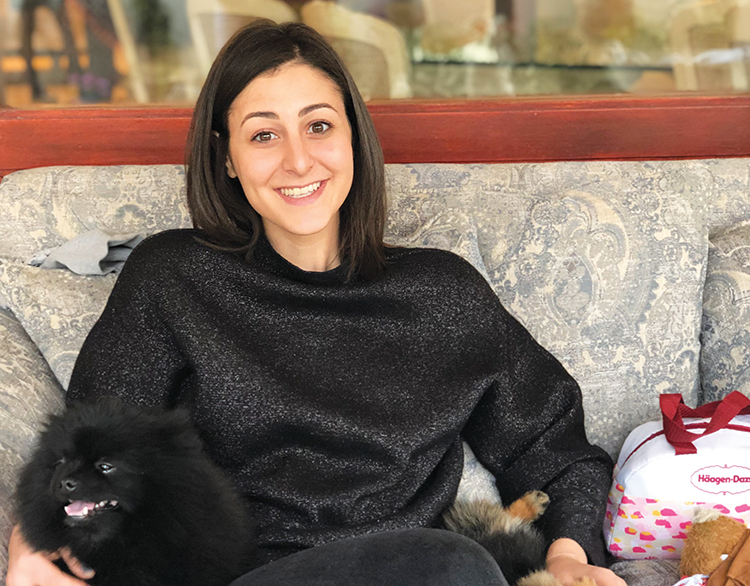 Gabriella Kourie – Lessons learnt from a diagnosis at age 19

Gabriella Kourie tells us how she dealt with the diagnosis of Hodgkin lymphoma at age 19 and what she learnt from it.

Gabriella Kourie (26) lives in Johannesburg, Gauteng and recently got engaged.

Gabi was nearing the end of her first year of studies in BSc (occupational therapy) when she became extremely fatigued. “I would sleep anything between eight to 12 hours a day. I thought it was burnout from studying for the up-and-coming end of year exams. I was unable to finish more than 15 minutes of exercise without feeling lightheaded. Two months leading up to the diagnosis, I was continuously sick with general flu, like a cough or post-nasal drip. Then a left clavicular node popped up to the point where I could palpate it and see it from the side. It was hard but not painful to touch and was getting larger daily.”

Two weeks after her 19th birthday, she was diagnosed with Stage 2 HL. A large tumour in her sternal nodes with spread to her clavicular nodes were found. The cancer was aggressive and fast-growing with an urgency to start treatment.

Her treatment plan included six cycles of combined chemotherapy (ABVD) for six months and 18 sessions of external beam radiation to both sides of her chest wall.

Gabi’s biggest question was Why me? “I wanted to dissect my lifestyle and crack the cause of cancer but this was impossible. I was healthy, at the prime of my training and dieting so I needed to find someone or something to be angry with, and for a long time I had a lot of internal anger.”

The 26-year-old recalls crying twice during treatment: the night she was diagnosed and when her radiation was increased. However, she notes, “I trusted the process and believed my oncologist that the end outcome would be remission. I kept a positive attitude and believe a strong and happy mindset was half the battle won. Often I think of my diagnosis as a blessing as I was forced to see life from a different perspective and learned the value of what is important and what isn’t at a very young age.”

“I lost many friends that couldn’t relate to my experience and it was hard to see others partying and carrying on with life while my priorities were wash your hands and rinse your mouth. The effects of hair loss were more severe than what I was prepared for. It was difficult to accept and I wore a wig for the majority of the time until I was comfortable enough to answer the questions that people asked as no one assumed I was going through treatment but rather a rebellious teenage act of shaving my hair. I don’t sweat the small stuff anymore and it takes a lot to get an emotional response from me.”

Continuing with her studies

Gabi decided not to take a break from studying and pushed herself through her second year. “It was tough; I remember hating my anatomy dissection lectures on the days I felt really nauseous but my faculty was incredibly supportive and allowed exemption from lectures every second Friday for chemotherapy. In hindsight, I don’t regret it, having to be up and ready for lectures on a Monday morning kept me mentally and physically focused and it helped me feel as normal as possible.”

Her family members were her biggest blessing and support. “We’ve lost family to cancer so my diagnosis was a larger knock to them than it was to me. I am, to this day, eternally grateful for every friend, family member, message and prayer that was sent my way.”

The possibility of infertility due to treatment was discussed with her. However, due to the urgency to start treatment, the process of fertility preservation would’ve delayed it.

She adds, “At the time having children was not in my five-year plan so I put it on the back pedal and trusted that my body would regulate itself after chemotherapy.”

“Oncology rehabilitation is a career path I chose with open arms. I love each person that I treat because I can empathise. It’s also a daily and humbling reminder of how quickly life can change and how grateful we should to be to wake up and fight another day.”