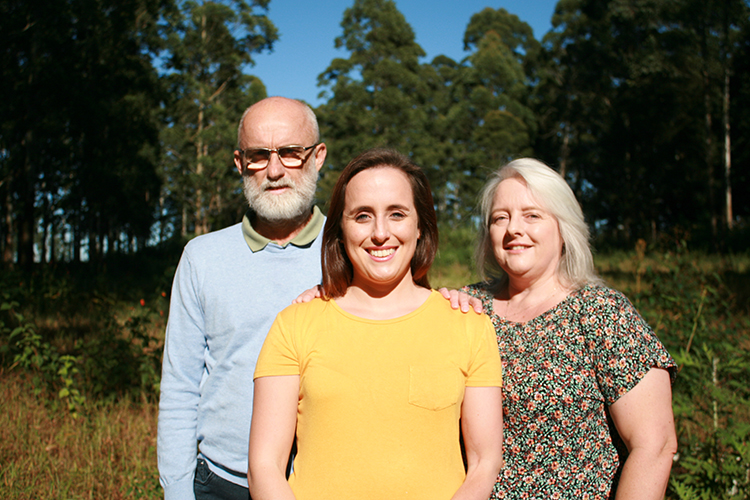 Emma-Liegh Riggien shares how she underwent limb-saving surgery when she was diagnosed with synovial sarcoma at age 15.

Emma was diagnosed with synovial sarcoma when she was 15 years old. “For 18 months prior to being diagnosed, I couldn’t straighten my left arm but we never though anything of it until it started to hurt when being pulled straight,” Emma explains.

“I was at a Halloween party where we were all dancing and someone pulled my arm straight and it hurt so badly. At about midnight my dad, Philip, took me to a hospital where I had X-rays and was given a pain injection. I was sent home and told it was all in my head and

I was wasting my parents time. A couple days later I went to see a chiropractor who thought I had snapped a tendon and should go to see an orthopaedic surgeon. The surgeon sent me for an MRI which came back with the news.”

“I sat on the bed in the surgeon’s room while my mom, Debbie, and dad, Philip, spoke to him. I remember thinking, why is mom crying? and why is the doctor telling my parents I need to take this seriously? I sat looking at the birds outside the window while they spoke, the tears were building up because I knew it was bad news. We got in the car, came home, my dad sat me down and told me ‘They think you have cancer.’ I was immediately more worried about my sister and brother and whether they had it too. I don’t think at the age of 15 I quite realised the seriousness of it.”

Chemotherapy and radiation were set out first before any surgery to try and save Emma’s arm. “My tumour was so big in my elbow and I was so tiny that they would have had to amputate my arm when removing the tumour; they have to take 2cms around the tumour, which would have included my bone. My lovely oncologist was determined to save my arm,” Emma explains.

Emma’s parents decided not to tell her that there was a chance that she could lose her arm. Her response to this is, “They were protecting me and didn’t want me to be scared. When I think of that now, I’m grateful I didn’t know.”

“I first did three rounds of chemo which lasted four days, two weeks apart. Then I did radiation for six weeks. I ended up going to Cape Town for limb-saving surgery, where a titanium piece was placed in my arm and my radial nerve was removed. I then continued with more chemo. Six-months later,

I was back in Cape Town for tendon surgery, so I could use my hand. After this surgery, I went to rehab to get my arm and hand moving again. Between the two surgeries, I wore a claw-like contraption on my hand which prevented my wrist from flopping and allowed me some movement before I went for the surgery to move tendons around. I now have 85% function of my arm and hand. I was left-handed when diagnosed, I had to teach myself to be right-handed. Now I’m lucky enough to be able to use both hands to write.”

There was no discussion of taking preventive measures to preserve Emma’s fertility. She says, “I was still so young and honestly, it didn’t occur to my parents to even question it, they had no idea of the risks chemotherapy had. Everything happened so quickly. To be honest, I don’t know if I want children so I haven’t ever done a test to see if I can or can’t.”

Emma was at the end of her Grade 9 year when she was diagnosed. The high school she attended graciously allowed her all the time off that was needed. “They promoted me to Grade 10 but in total, I only spent six months at school. The six months I wasn’t at school were spent doing scans, radiation, blood tests, chemotherapy, and surgery.

I still attempted to write my exams even though I had just had limb-saving surgery 10 days prior. I was allowed into Grade 11 as I could show them I knew what was going on. Grade 11 and Matric, I was on my own, with no one pushing me through grades anymore. I had to work hard to pass and I did. I passed Matric in 2012 with all my friends,” Emma says.

When asked if she told other pupils at school, Emma responds, “No, I didn’t want anyone to know but I do remember telling my best friend, Jade, the day I was diagnosed. We both cried but went out and bought goldfish. She made it easy at school, she protected me. People guessed but I didn’t really open up and tell people. It was new to me, I had no idea teenagers got cancer and here I was 15, with cancer that is typically found in the knee. My sister, Courtenay, was in Grade 11, she stuck to me like glue and didn’t let anyone mess with me.”

Due to Emma’s diagnosis, her mom, Debbie, joined Rainbows and Smiles, an NGO that support children with cancer and their families in 2015. “When I was diagnosed, we knew no one else who had a child with cancer. My family sat in the hospitals with me and just prayed and hoped the decisions they made were the right ones. They had no other family to speak to and compare notes. There was no support group that could help with the emotional support for kids and teens. For this reason, my mom started working for the NGO to help raise awareness. She visits the kids in hospitals, takes them little gifts and speaks to the other mothers and gives them hope that their child will too be a survivor.”

Support from family and friends

“My family stood by my side every step of the way. My sister spent a week in hospital with me because I didn’t want to be alone. Every visiting hour at the hospital had every family member you can think of there. My friends would visit too; they never allowed anyone to make rude comments about the girl in the beanie. Jade took time off school to go with me to my scans which eased my anxiety as she did everything possible to make me smile and laugh. My family and friends made me feel so comfortable that I was never shy to go out and about and live my life.”

Being a teenage cancer survivor

Emma says she wouldn’t change how she handled her diagnosis. “I’m grateful for what I went through and how it happened. If I didn’t go through having cancer, who knows if we would be here today trying to raise awareness. Plus, I learnt to be grateful for absolutely everything and that your life can change in a blink of eye so don’t ever wait until tomorrow, do it now.”

“I think because I was so young when it happened, I don’t acknowledge that I’m actually a survivor and I won the battle. I don’t like to let the cancer define me or be who I am. I’m eternally grateful to be a survivor and be here today to drive my family and friends mad.”