In this together – Cameron Martin

Sixteen-year-old Cameron Martin shares how his family and friends have helped him adjust since he was diagnosed with osteosarcoma.

Cameron Martin (16) lives in Weltevredenpark, Gauteng with his parents, Roger and Samantha, and his younger sister, Caitlyn.

When meeting the polite teenager, one would never think he has just undergone major surgery and cancer treatment. His relaxed and level-headed attitude is supreme.

Being an avid sportsman, playing cricket, hockey and at times athletics, Cameron automatically assumed his sore knee (right) was a sports injury. He went for physiotherapy but the ‘injury’ kept on recurring.

With Cameron’s parents also being active sportspeople, both playing hockey, they thought Cameron needed strength and conditioning training so carried on with the physio sessions.

Though, after two months of Cameron’s knee not getting any better, the physiotherapist suggested he has an X-ray as she suspected there was fluid in the tissue.

The then Grade 9 Parktown Boys pupil was referred to an orthopaedic surgeon by the radiologist. Several diagnostic tests were done and five days later, the biopsy confirmed that Cameron had osteosarcoma.

The tumour was below the knee, behind the tibia.

Cameron’s parents were with him when the doctor broke the news. He says, “I was shocked and a bit sad…but didn’t really understand what it meant and had to learn about it. In school, just before I was diagnosed, we learnt about it a little bit. Then this year, we learnt about it with a bigger understanding in Biology. But, at that time I didn’t know that I would have to go for chemo, I just knew that I would need to have surgery.”

Samantha, Cameron’s mom, says, “To hear that your child has cancer…I can’t even describe it. Your first instinct as a mom is to protect and to fix. But, this is something that you can’t. It is taking things out of your control.”

She goes on to repeat what the surgeon told them from day one: “My priority is to save your son’s life, then to save his leg and knee, and lastly reconstruction.”

For the three months before surgery, the thought of her son’s leg being amputated was always at the back of her mind.

Cameron was fully aware that there was a chance of his leg being amputated but he says he just pushed the thought out of his mind. Just the same as he tried not to think about death.

Once the treatment plan was mapped out, Cameron got a chemo port inserted on his oncologist’s recommendation. Then on 23 July

2018, the 15-year-old started six cycles of chemotherapy of five weeks each. His cycles comprised 72 hours’ continuous cisplatin and 48 hours of Adriamycin (Red devil), with four hours of methotrexate administered in week four and five. The teenager would be in hospital in week one, four and five as he had to be monitored.

After the first two cycles, an MRI was done and showed the tumour had shrunk.20-hour surgery

Cameron then had surgery on 17 October. The 20-hour surgery was intense. It included the removal of the tumour, as well as a piece of the affected tibia bone that was radiated, for one hour during surgery, and placed back.

A piece of his fibula (from his left leg) was then used as a rod to reconstruct his right tibia, with a metal plate and screws.

Once the tumour was removed from the bone and soft tissue, it was deemed a non-viable tumour, meaning there was no cancer.

For three weeks, Cameron was bedridden, not able to move. The following two weeks, he could get in and out of a wheelchair, then by eight weeks’ post-surgery, the physiotherapist gave him a walker to walk with, then crutches.

The teenager then carried on with the remaining four cycles of chemotherapy a month after surgery.

By the time Cameron finished chemo May this year, he was using one crutch.

Once Cameron was diagnosed, which was in the July school holidays, his parents had a meeting with his school principal. “His school really supported him. They were phenomenal! They even held a Shavathon fundraiser in his honour. He was told to focus on his health, but if he felt well enough to attend school, they would welcome him. Though, we did ask them to send work for him to keep him busy,” Samantha explains.

“The oncologist advised to keep him at home due to his immune system being broken down by the chemo. This was to avoid getting any infections.”

All in all, Cameron missed school for a year (term three and four of Grade 9 and term 1 and 2 of Grade 10). Due to his marks being quite good in the first two terms of Grade 9, the school allowed him to be promoted to Grade 10 by giving him the average class and grade marks for the last two terms.

Then, for the first term of Grade 10, Cameron had no marks but started attending school a week before exams started. “We agreed that he would try and attempt to write exams, but for no academic reason at all. Rather to give his teachers a baseline of where he should focus. Their aim for him is to pass this year, so he can be promoted to Grade 11. But, we as a family, will make our own call at the end of this year,” Samantha says.

Cameron humbly says that he did okay in the exams “but not that good.” While his mother adds that he passed everything, except for Maths and Science. “But, his Maths teacher phoned me and said she was impressed. Yes, he had failed but the fact that he self-taught himself some of the things was good.”

When asked how Cameron kept himself busy and entertained during his cancer treatment, he responds like any 16-year-old boy would: screen time playing games (Fornite and Minecraft) with his friends.

Reading science fiction books also kept him occupied, and his friends would visit him during his weeks off from chemo.

Naturally, a cancer diagnosis has a ripple effect in a family. Unfortunately, Cameron’s surgery was on the day of his sister’s 13th birthday. “That is a big milestone for a little girl,” Samantha adds. But, being a loving sister, Caitlyn accepted it and was there for her brother. They still had a family dinner that night (while Cameron was in theatre) and she got to celebrate with her friends by going ice-skating and getting their nails done a few days later.

Samantha also promised Caitlyn that one of them (parents) would always be at home with her. And, Samantha’s parents were the support structure that helped them through this ordeal.

Since the beginning of this July, Cameron has been off crutches and walking unaided. He currently sees a biokineticist every Wednesday for a 45-minute session and gets exercises to do at home. “I am very stiff the next day,” Cameron says.

He can’t run yet but is hoping to soon so he can get back to playing hockey and cricket.

According to Cameron, his cancer diagnosis has matured him. “I used to mess around a lot…before my diagnosis…I was not that serious about school work. Now, I’m more focused. I’m getting better every day and adjusting to school.” 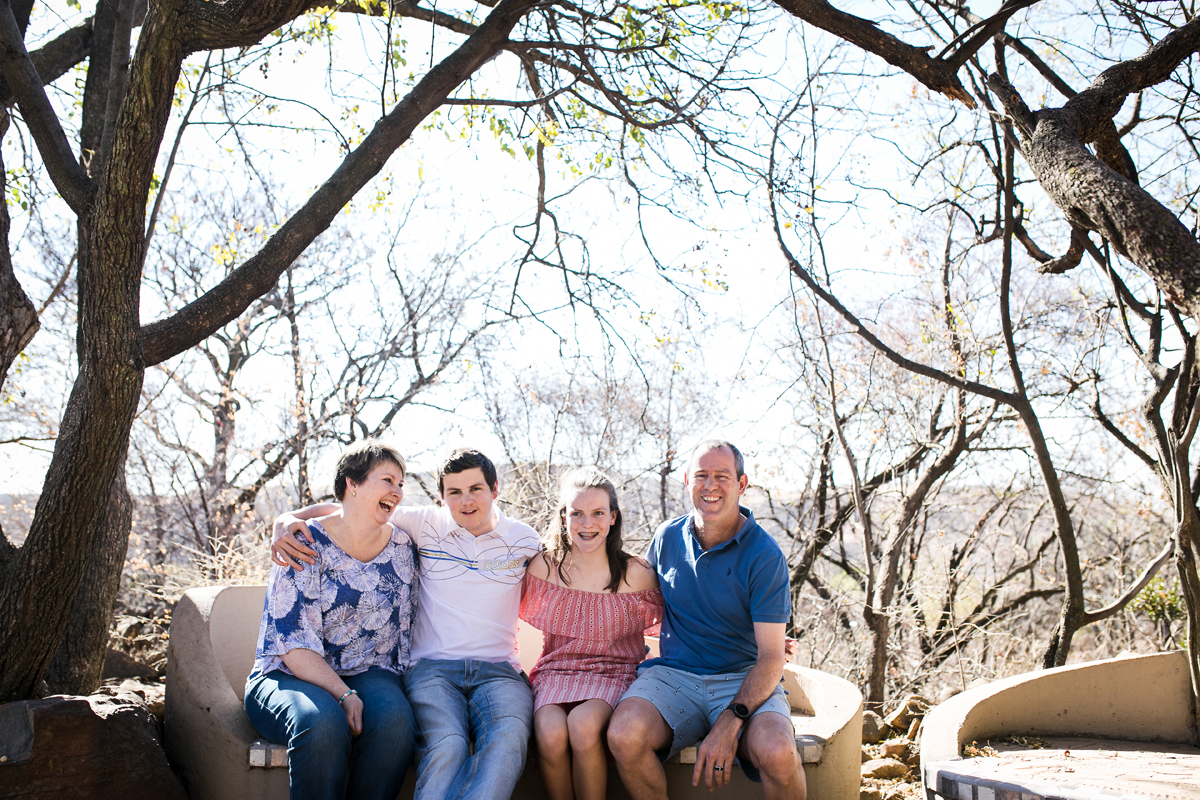 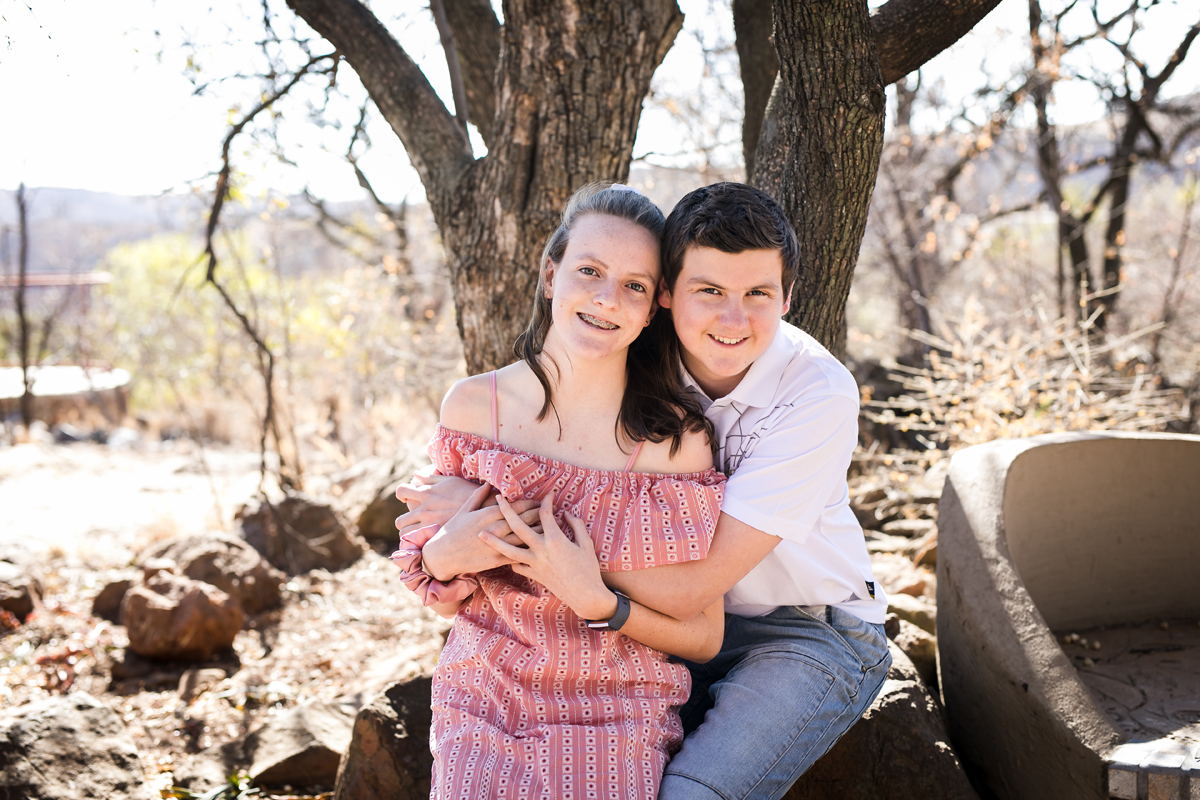 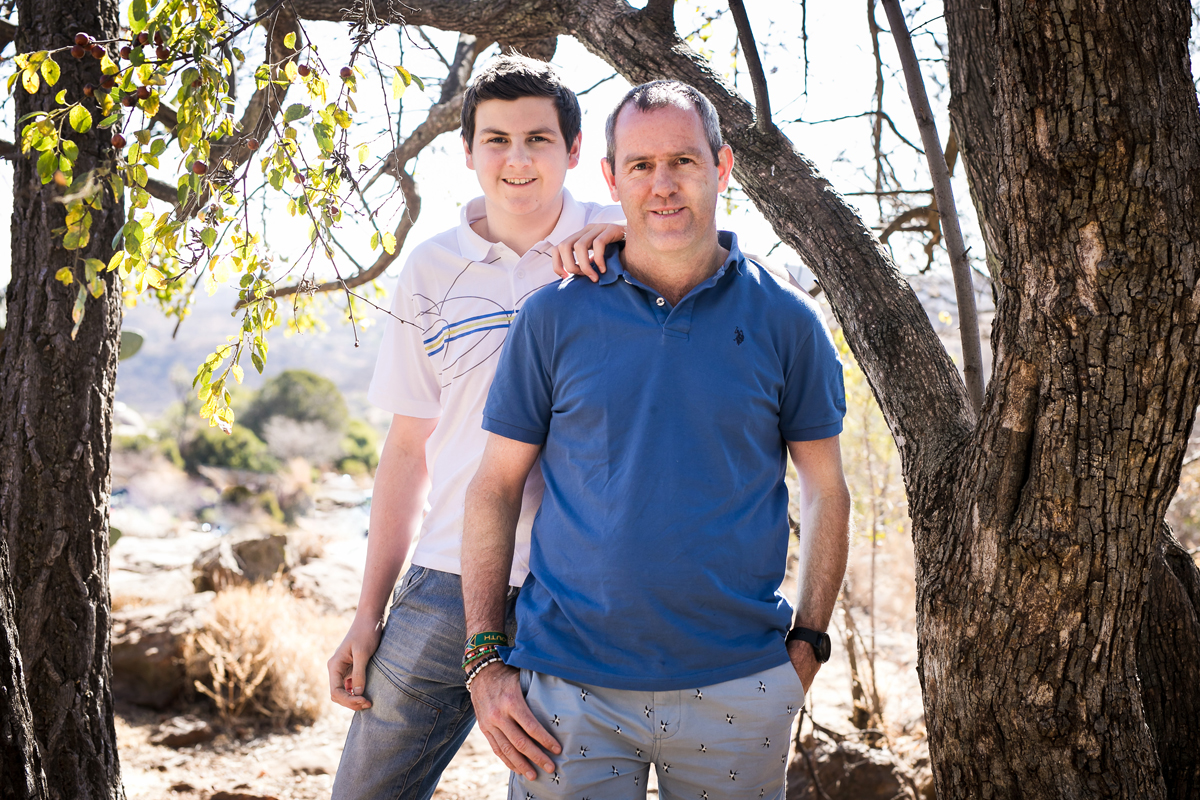 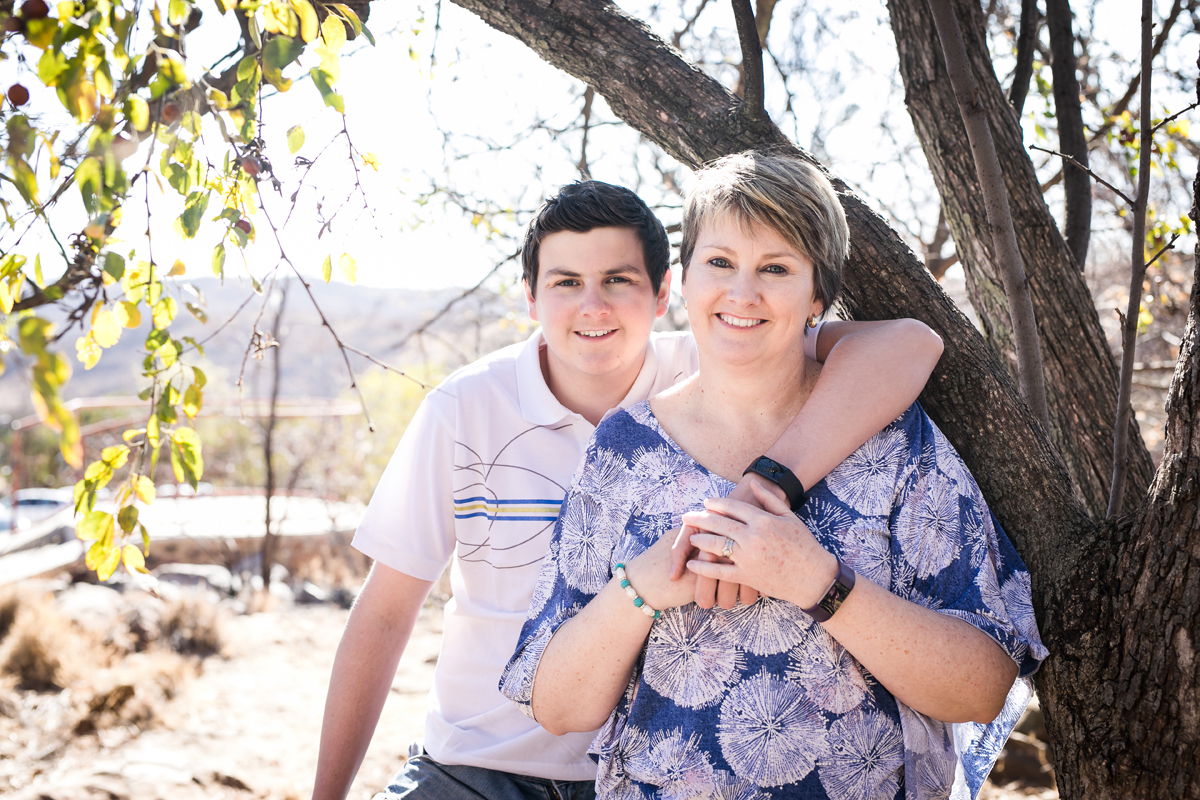 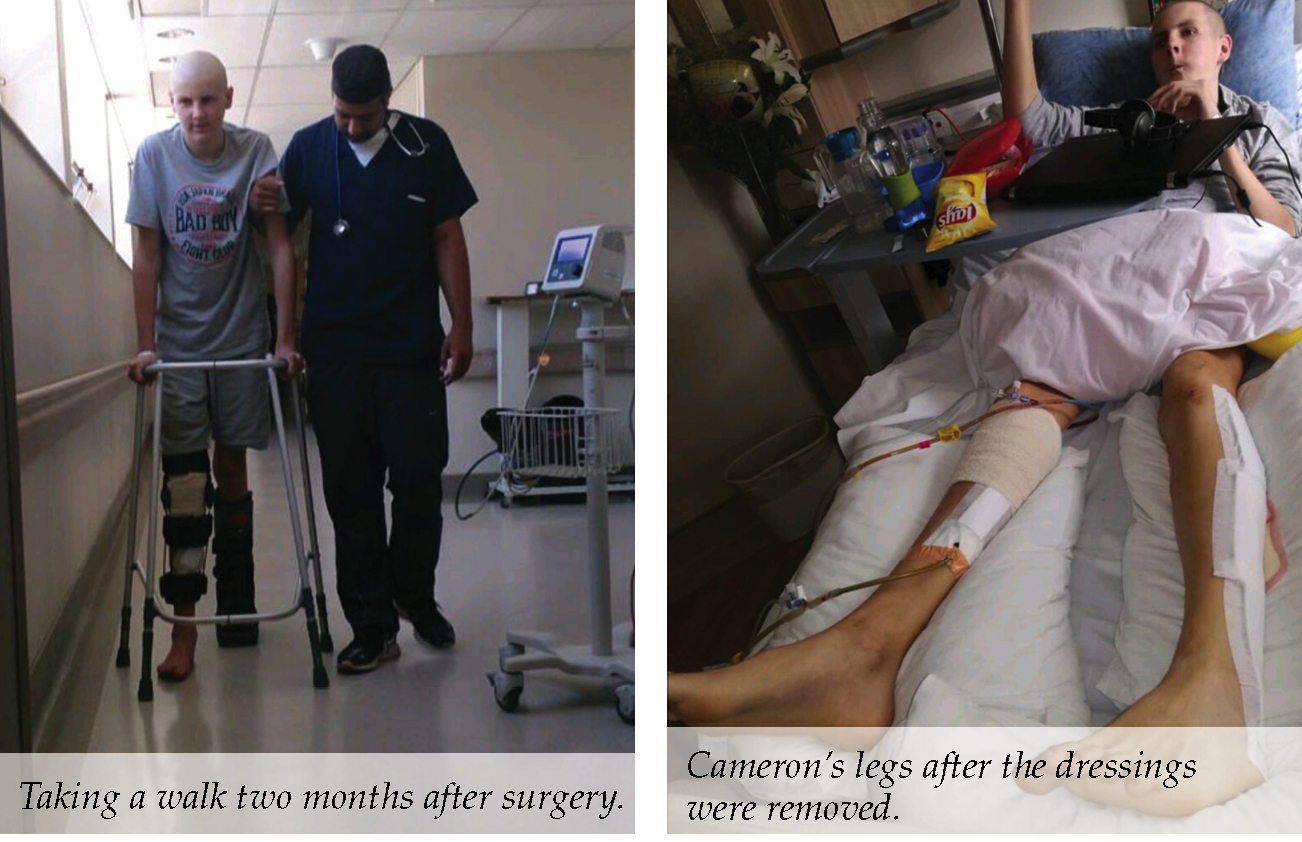