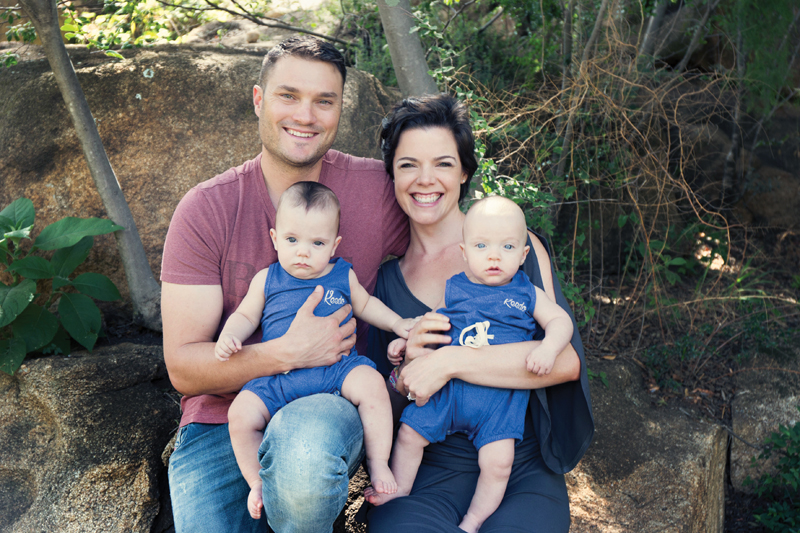 The birth of twins and Amara Grace

Anja Berkowitz (35) lives in Fourways, Gauteng with her husband, Jordan, and their twin sons, David and Noah (3).

In September 2015, about a year and a half into fertility treatment, Anja fell pregnant. Jordan and Anja were thrilled to be expecting twin boys. Their life-long dream was becoming a reality.

Three months into the pregnancy, Anja experienced complications, including bleeding. After changing doctors in January 2016, the expectant mother was told she had cervical cancer. Two choices were given: terminate, or undergo chemotherapy while pregnant.

“Getting this news…I can’t even describe it. There was just so much to consider. Firstly, am I going to survive it to be there for my kids? Secondly, are my unborn babies going to make it and if so, will they be fine?” Anja says.

Shock and confusion hit, as before fertility treatment, Anja underwent numerous tests, including a Pap smear which was clear.

The then 32-year-old wife made the valiant decision to continue with the pregnancy. Jordan and Anja discussed it but, in the long run, her last few moments with her father, six months prior, was the deciding factor.

“I lost my father to pancreatic cancer. He was in a coma and one day he came to and asked for me. When I went there, he was in tears and told me he saw my kids playing in the street. The fact that he said kids (plural) and that he fought so hard to give me this message was a sign for me to fight. Plus, my instinct was to fight,” she explains.

Anja was put on bed rest and once she reached her third trimester, her planned treatment regime commenced: two cycles of chemotherapy, a caesarean section at 32 weeks, then a radical hysterectomy immediately after.

Though, at 26 weeks, Anja started having contractions. After medication, and mental readjustment with the support of her family and friends, Anja held it together and made it to 32 weeks.

Anja then underwent a radical hysterectomy and an ovarian transposition (where her ovaries were re-positioned). This was to balance her hormones and in case she needed radiation.

Though, no radiation was needed as it was confirmed to be Stage 1b cervical cancer (4cm tumour) after a biopsy was done on the whole tumour.

The new mother only saw her sons the next day. “The scariest thing was being pushed into the neonatal intensive care unit and not knowing which babies were mine. It was such a scary and overwhelming feeling. But then I met them and they were perfect, small but perfect.”

The twins were kept in neonatal for a month and getting their ‘golden milk’, which Anja expressed, became a full-time job for her and her husband. Two weeks later, Anja was in excruciating pain. After two visits to her doctor, it was decided the only way to see what’s wrong was if she was opened-up again. An emergency operation was scheduled; infected fluid in the bowel was discovered, which was cleaned out.

“I then started the healing process all over again…and it took very long. I would say this was the lowest point for me as I didn’t know if my body would recover. Plus, I couldn’t see my boys…hold them or feed them. The only thing I could do was express milk for them; so I continued with that. I would dump milk when I was on certain meds and then give them milk once the meds were out of my system,” she says.

Once mom and boys were home, looking after them was a challenge at first. “I was so weak. I couldn’t even pick them up. Jordan was great and we also got an amazing night nanny. I slowly got into being a mother and I loved the time I got to spend with them.”

Anja explains that when she was undergoing chemo with her pregnant belly and hair falling out, she was extremely private about what she was going through.

“I wasn’t ready to share my story because I was still fighting very hard. It’s emotionally draining to share what you’re going through if you’re in the middle of it. I found it hard to live a normal life. But my husband would take me out for a cappuccino, or we would have friends over, if I felt up to it.”

“It was important to me to still be proud of the way I looked…to feel stylish and feminine and to not draw attention to the fact that I’m ill. And losing your hair makes it common knowledge. So, I tried numerous headwear but still felt it screamed chemo. And, wigs are just uncomfortable so personally didn’t work for me,” the mother explains.

Anja had trouble finding suitable and trendy headwear; she even imported headwear from America. But still it didn’t meet her needs. “During chemo, your scalp is sensitive so you want something organic, something light and that is not going to be too hot or cold. You also still want to look good.”

So, this was always at the back of her mind. Another thing that struck the cervical cancer survivor was how many young women were undergoing chemo. This was a big motivator for Anja to manufacture her own headwear: feminine, comfortable and stylish so young and old women could feel confident wearing it.

So, when David and Noah were one and a half years old, Anja started researching. “A bonus is living in Africa, headwear is trendy here. So, it’s not only for cancer patients but also for women who want to add to their style of fashion,” says Anja.

After much research, Anja found that bamboo was the best material for headwear. “It’s supremely soft, silky and luxurious to the touch. It’s the ultimate in comfort and thermoregulation. Plus, the fabric I source is anti-bacterial and anti-fungal, skin sensitive, breathable and moisture-wicking. But most of all, the headwear is feminine and beautiful,” Anja explains. And, so Amara Grace was born.

So far, they have had great reviews with Naheeda Osman saying, “My aunt just got diagnosed with Stage 3 breast cancer and your headscarves make chemo bearable. They also make up for the loss of hair. So much joy in her eyes when she dresses up and pairs up her outfits with the Poppy headscarf.

Anja concludes, “I’m so pleased that I have found a way of making women feel comfortable and beautiful while going through chemotherapy and fighting for their lives.”