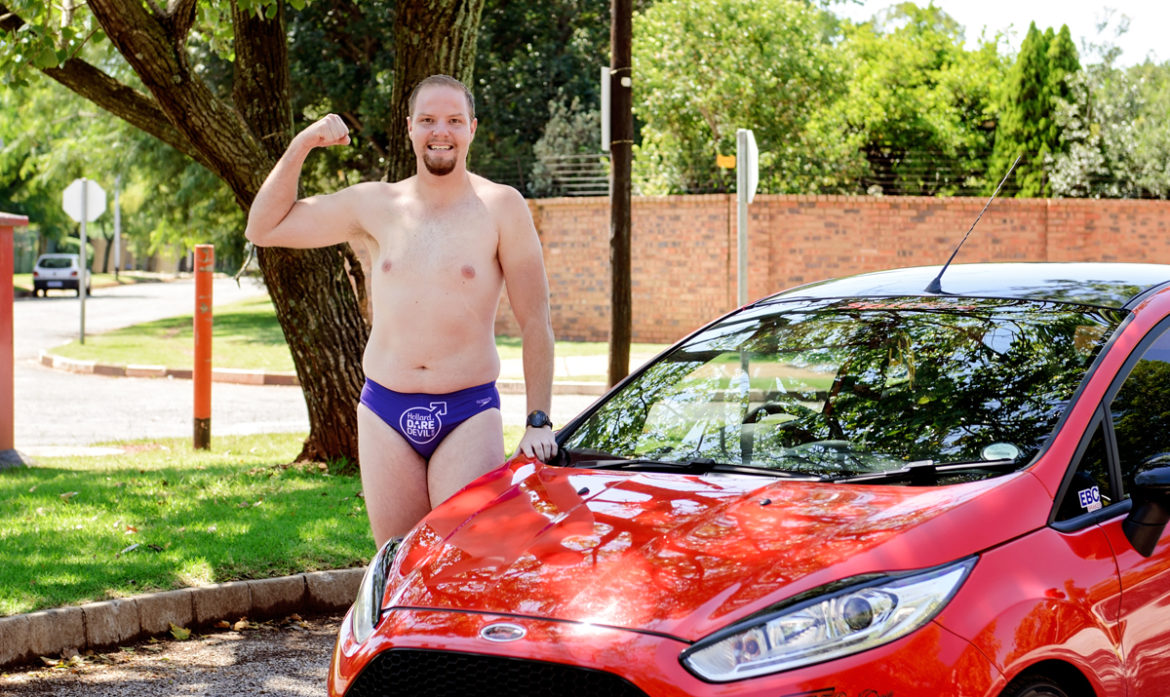 Hollard DareDevil Run ambassador, Judd Van Den Bergh, shares his testi-monial of being diagnosed with testicular cancer at the age of 23.

Judd never worried about his health and fitness. As a result, he was overweight and never thought too much about it. In his mind, he was young and indestructible. But in April 2015, his indestructibility crumbled.

“When I first found the lump, I was scared to go to the doctor. I pushed myself into believing that it’s nothing major and that it will sort itself out.

I waited a week before I decided to go to the doctor, who sent me for a sonar the same day. The next day, a Friday, I was sitting in a urologist’s rooms where he confirmed, at the age of 23,

I had an advanced Stage 1 testicular cancer. Honestly, the rest of that day was soul-destroying,” Judd explains.

That Monday Judd underwent a left orchidectomy where they removed the affected testicle. “The surgery was difficult to recover from as I had developed a haematoma (a solid swelling of clotted blood) in the area which took a while to resolve. After two weeks’ recovery, I met with an oncologist. Although the cancer had been caught early, he recommended that I receive two rounds of bleomycin, etoposide and cisplatin (BEP) chemotherapy.

This meant six weeks of chemo. The treatment was hell, to say the least. Even though I was young, no one could have prepared me for what lay ahead. The BEP caused intense nausea, hair loss, weakness, etc. All the known side effects of chemotherapy were there. So much so, that during round two of chemo, I had to be given large amounts of steroids as my heart was struggling against the chemo.

It was a long journey. One that I never want to repeat,” Judd confesses.

The treatment journey took its toll on Judd and his family. Though, he states that without their support, he would not be here today. “My biggest help came from my family, who were there to look after me and support me through everything. Their support was most helpful throughout my treatment, as it kept me emotionally strong. Strong enough to beat this disease.”

Riddance of 37kg and depression

Unfortunately, Judd didn’t feel positive after treatment. He fell into a depressive state and being a comfort eater, he gained even more weight. “I was feeling sorry for myself and my weight ballooned to nearly 140kg,” he says.

“After working through all my emotions with family and counselling, I decided I needed to get my health back on track. I was offered a second chance and I couldn’t pass it up. I became very strict with my diet, making sure all sugar and processed foods went out the window. I made sure I was eating whole foods, and lots of fresh fruit and vegetables. With this, I picked up my exercise regime and a friend got me roped into a parkrun one Saturday morning. This continued until I got down to my current weight of about 95kg. I am now big into running. I have progressed my training to a couple of runs per week and recently completed my first half-marathon.”

A pleasing attribute of Judd’s oncologist was that he was honest about the chance of infertility due to chemotherapy and offered Judd fertility options. “He spoke to me about fertility before both the surgery and chemo. Fertility was an issue for me as I want kids in the future. My oncologist explained that the loss of one testicle doesn’t change my fertility, but the chemotherapy might impact my fertility for the short-term, and a small percentage of men are affected in the long-term. It was recommended for me to visit a sperm bank, before I started chemo, and bank a few samples for potential future use. I have that as my safety net. Though, I would like to go for a fertility check soon,” Judd says.

Some may think a man may feel less of a man with one testicle but not Judd. He explains, “the sensation of losing a testicle is strange, and the overall feel was that something was missing, but I didn’t and still don’t feel any less of a man at all.”

Judd is a Hollard DareDevil Run ambassador. Unfortunately, he couldn’t take part in this year’s run due to a back injury. Though, he is thrilled to play a part in such an ‘absolutely amazing’ initiative. “The DareDevil Run challenges men of all body shapes, ages and experiences to say no to social stigma, to go against the grain of normality, and stand up for what is right! The image of thousands running through the busy streets of Joburg in peak hour traffic definitely raises awareness! The stigma with men is that they think it’s uncomfortable to get checked for either prostate or testicular cancer. The reality is that it is most certainly not! It’s as comfortable as a normal visit with a GP, and it is extremely important to get checked, because we know that early detection saves lives.”

Even though the Hollard DareDevil Run is making great strides in educating men about prostate and testicular cancer, Judd still feels that there is not enough awareness. “There is so much more we need to do, to reach younger males and speak to them at face value about testicular cancer. It’s incredibly important that we know how to do self-examinations and that we’re comfortable looking after our bodies, because you know, sometimes they try to kill us. Let us men not be afraid to talk about this. There is no reason to be scared. Be brave and be aware!”

Judd is now fitter, stronger and happier than he has ever been! He has a beautiful girlfriend, a good and challenging job and he is living his life to the fullest. “Beating testicular cancer has given me a new lease on life! I get up every day with the ambition and drive to make the most of the chances I have been given.”

Laurelle Williams is the Editor at Word for Word Media. She graduated from AFDA with a Bachelor of Arts Honours degree in Live Performance. She has a love for storytelling and sharing emotions through the power of words. Her aim is to educate, encourage and most of all show there is always hope. editor@buddiesforlife.co.za