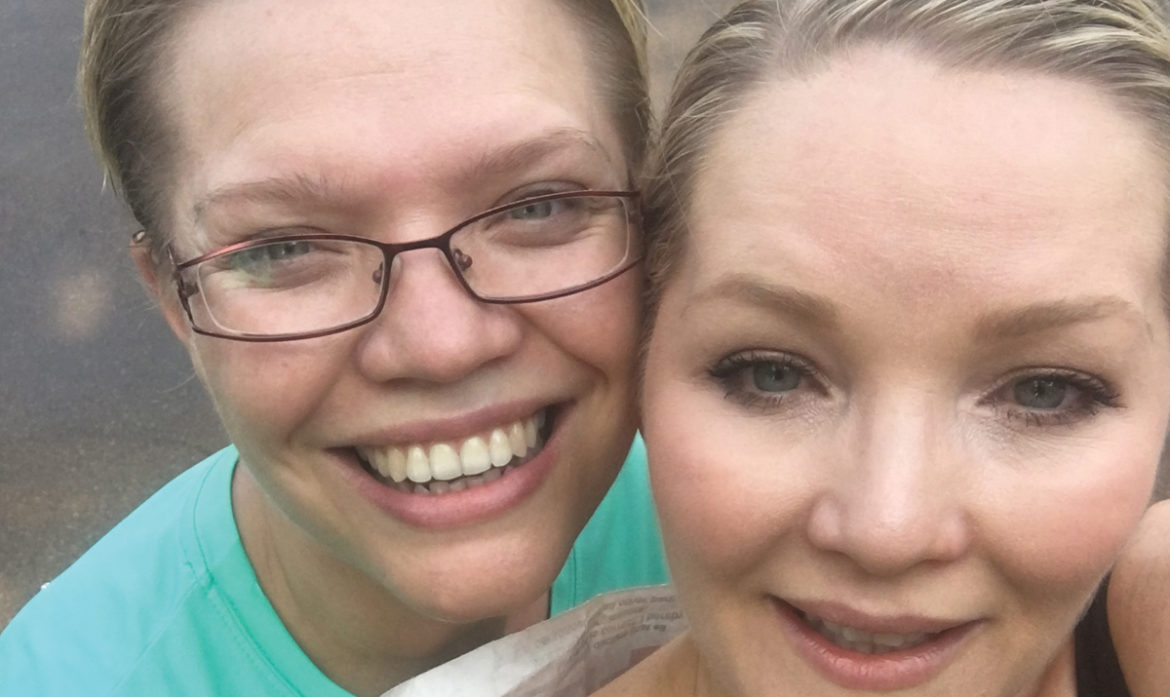 It’s hard to imagine that cervical cancer affected the lives of two sisters in the same year, and in very different ways. Sisters, Alrita Groenewald and Tessa Supra, share their rare but moving story.

Alrita (41) was given less than 30% chance of survival, while her sister  Tessa Supra (46) chose to silently carry the burden of her subsequent diagnosis.

Alrita’s cervical cancer diagnosis comes just after giving birth to her third child. In January 2015, Alrita, then six months pregnant, complained to her gynaecologist of excruciating back pain. Prevented from taking strong medication due to her pregnancy, she found herself unable to sleep, and forced to work standing at her high-pressured marketing job to lessen the pain.

However, back home four days after her daughter Mila’s birth on 17th April 2015, she collapsed in agony. Her husband, Hennie, rushed her to the nearby Life Wilgers Hospital.

X-rays revealed a swollen kidney. Her gynaecologist advised she be transferred to Netcare Pretoria East Hospital, where he and a urologist examined her, administering strong pain medication.

Alrita agreed to exploratory surgery and woke up to the news that a biopsy had revealed Stage 2B cervical cancer. “I saw his mouth moving but I couldn’t take anything in, I was so shocked. They said the growth was aggressive and constricting my left kidney’s ureter. I thought, how can I be given the miracle of a new-born baby and then find myself on my way up to the Lord to keep him company? I asked the Lord to give me back my life,” she recalls.

Denial set in, followed by fear and uncertainty and lastly, determination to overcome with faith and positivity.

Turning into a recluse

“Not only did the treatment ravage my body – if you don’t fight with all your might, cancer can wreak havoc with your mind, heart, and brain. All kinds of negative thoughts tend to take hold of you and you literally find yourself in a black hole,” says Alrita.

Soon her mental battle with cancer turned her into a recluse. Instead of her usual outgoing and jovial self, for four months she hardly spoke a word. Of the first few months of Mila’s life, she has no memory.

As a family, they discussed Alrita’s cancer and the effect it might have on her. The couple sat down their older children, Gustav (14) and Zara (8) telling them they had upsetting news but that they should stay calm and ask any questions they wanted.

“Zara asked if I was going to die. I replied that as long as I drew breath we’d throw everything into the fight. We could only do it together if everybody spoke their mind. I told them we needed all the support we could get,” Alrita says.

The children received counselling. Zara got her school class to pray every day. Her teacher later telling Alrita that her pupils learnt more about life from Zara in those lessons than most people do in a lifetime.

Stage 2B turns into Stage 3B

Intensive chemotherapy followed. Alrita believes that her husband initiating a 24-hour prayer group, together with the intense radiation and chemotherapy turned the tide for her. “The Lord healed me. He blessed the right people to be efficient enough and to have the right wisdom to treat me in the correct manner so that I can talk about my cancer today,” she says.

On 21st July 2015, having skipped her final two radiation treatments due to exhaustion, she received another set of results. The treatment was successful. She was cancer-free, but her left kidney had suffered irreparable damage and had to be removed. Despite this, today Alrita is fighting fit.

The mother of three bitterly regrets    not consulting her gynaecologist more regularly before her last pregnancy. “I felt absolutely fine and experienced no discomfort or pain, so for nearly eight  years I did not go for gynaecological examinations. For years, I did not realise the importance of having a Pap smear to detect cancerous cell growth. Today I know how vital it is that every single girl and boy should have the human papillomavirus (HPV) vaccine,” says Alrita.

Tessa Supra’s surgery on 20th August 2015 – on her birthday and four months after her sister Alrita’s surgery – included a radical hysterectomy.

The oncologist, she shared with her sister, confidentially reassured her that her outcome was more positive than Alrita’s. Only her daughter, Beaudine, then 19, and husband Grant knew about what she was going through. She believes that had she shared her diagnosis more widely, it would have proved too much for her mother. “We decided we’d keep it quiet until the final lab results after the hysterectomy.” That took eight weeks. Her all-clear came one month after Alrita’s.

The path of silence explained

“I absorbed a lot of anxiety and couldn’t reach out the way my sister did. Being made a fuss of is not my thing. Keeping it quiet was a choice, mainly for Alrita and my mum – they had enough on their emotional plates,” Tessa says.

Alrita sees Tessa’s silence quite differently. “I was surprised and disappointed when I heard – to have your family and friends unable to support you, is almost selfish. It’s a pity she did it that way, but it was her decision. Cancer doesn’t know age, gender, race or privacy – I think it could have been more healing for both of us, had I known.”

Tessa’s initial fear about the cost of cancer treatment soon receded when DHMS paid for her initial cone biopsy, no questions asked. “What impressed me most was getting a support call from Discovery while I was on their Oncology Programme. I was in tears when they told me there was a help line and a support line. Being fully funded was one less thing to worry about. It was seamless, they supported us with whatever we needed,” she says.

“My oncologist says it takes about 10 years for HPV to develop into cancer,” says Tessa.

“You can have three or four Pap smears in that time. If just one woman can go and see her doctor and be saved, then that’s the real story we want conveyed,” adds Alrita.