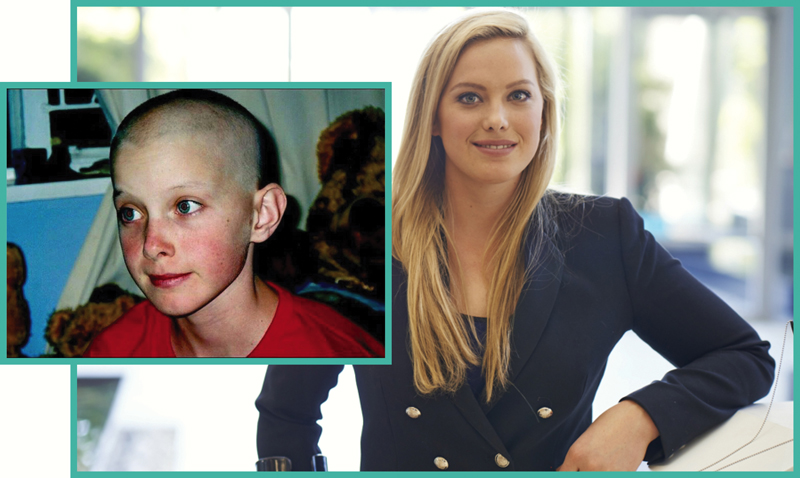 Emily Anne Gray tells us how she confronted a cancer diagnosis at age of 11, and how she chose life over limb.

Being an 11-year-old, Emily loved running. So, when she began to feel an aching pain in her left leg, close to her hip joint, the physiotherapist’s reasoning that it was a muscle injury, from all the races she competed in, made sense.

Though, after several different tissue treatments, the pain never subsided. Emily’s parents then took her to a chiropractor who sent her for X-rays, and osteosarcoma was discovered in her femur. By that time, the little girl’s hip was swollen and she was in agonising pain.

Six months of intense chemotherapy made Emily’s life a living hell. “It was as if the chemo was killing me from the inside out. After losing all my hair and weighing 25kg, I felt totally empty. Once it was completed, I felt so close to death. Even at that age, I knew I was very close,” Emily explains.

The doctors didn’t have good news, the chemo was not killing the cancer. In fact, the cancer had grown. There were two options: amputate the leg or undergo a hip replacement that could ultimately lead to the frail girl’s death.

Even though the doctors and Emily’s parents shared their advice with her – agreeing the amputation was the best option – the decision was solely up to the 11-year-old. “The rule remains life over limb. I understood that delaying things by one more day or week could result in the cancer spreading up into my pelvis and chest, which would therefore result in death for sure! I am glad it all happened so quickly and I wasn’t given the time to wonder what my life with one leg would be like,” Emily explains.

However, once her leg was amputated, the blue-eyed girl was met with many trepidations. Would her future be bleak and depressing? Would a man ever love her?

“Knowing that I would never run again scared me the most. I felt totally alone, like I was the only person with one leg. This was, of course, before social media. I felt like I couldn’t relate to anyone around me and I was the ‘freak’ in society,” she says.

This is when her father introduced her to swimming at Mandeville Sport and Social Club for the Physically Disabled. She met other amputees, like Natalie Du Toit, who was a major role model for her at that time.

“I began swimming as a method to cope better with emotions. Sometimes I hated it! Getting into a costume and showing my stump was exceedingly difficult. I was so concerned what people thought, that I swam with shorts over my costume.

I eventually built up confidence to ‘show off’ my stump; I truly believe that was the turning point for me in my recovery. This is why I am so passionate about sport and fitness as forms of rehabilitation for amputees. It gets us out of our comfort zone, which is usually at home – hidden away from society,” Emily vulnerably admits.

The teenager went on to compete in three Paralympic Games – Beijing (2008), London (2012) and Rio (2016).  She reached finals in both the London and Rio Games but unfortunately never medalled.

The 2012 London Paralympic Games has a special place in Emily’s heart as her family were all there. Even her granddad, who was 90 years old, was sitting in the crowds, cheering her on.

The Paralympic swimmer now works with amputees in the rehabilitation process from a sport science perspective instead of a traditional clinical setting, which she found had minimal impact on her recovery.

She mentors amputees, cancer patients, and war veterans with post-traumatic stress disorder (PTSD), by helping them reintegrate back into society through forms of health, fitness, nutrition and lifestyle.

The 25-year-old feels that medical aids in South Africa need to better their contribution to assistive devices saying, “They pay little to nothing for these types of devices; this needs to change. These devices aren’t just tools for moving around, they’re an extension of who we are and give us hope and freedom to move. And movement is vital for any sort of life!” For this reason, she is currently trying to raise funds on CrowdRise to purchase a new prosthetic leg as her current one is old.

Even though Emily says she skipped out on the normal teenage drama, she doesn’t feel like she missed out on much, and believes she is a better person because of cancer. “I want children who are fighting cancer to not question why this is happening to them. This is not happening to you because you’re a bad person or because God is punishing you. One day in the future when you are kicking-ass you will understand the ‘why’,” Emily says.