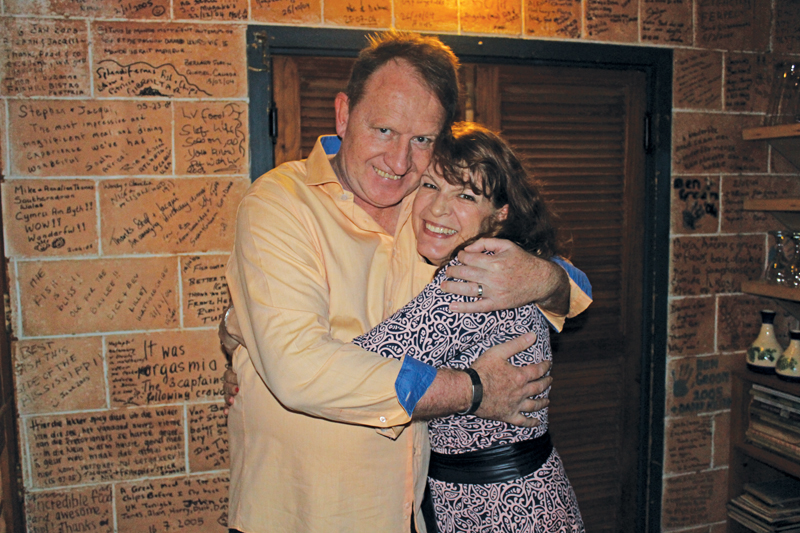 When you meet Dewald and Tina Botes, their love and care for each other is so evident and tangible. A couple’s love would need to be deep and rock solid to survive the shocking diagnosis of a frontal lobe brain tumour. We hear their astounding story.

After getting a second chance at love, and two and a half years of dating, Dewald and Tina made their commitment official by getting married. Nine months later, in October 2013, Dewald was diagnosed with a frontal lobe brain tumour. “When you are young, you get a honeymoon baby but when you old, you get a honeymoon tumour,” Tina joked.

“Seven months after we got married, I wondered what was happening to my husband. He was acting weirdly. I thought maybe he changed now that we got married? He suddenly became very immature, once refusing to put his plate in the dishwasher because Charissa hadn’t put hers in. Then, while I was on a business trip in Israel, he phoned me to ask where we keep the toilet paper. That was exceptionally weird as he knew where it was, plus a call to Israel for toilet paper is a bit of an expensive call,” Tina explained.

Tina thought he was suffering from depression as at that time Dewald was unemployed due to retrenchment; she would find him in the exact position in the evening, when she came home from work, as he was in the morning. He had also suffered severe labyrinthitis in May 2012, and the effects (nerve damage) only became visible in February 2013 so Tina thought that could also be the cause for his strange behaviour.

After coaxing him to a GP four times, a doctor agreed that he was depressed. Dewald started complaining about severe headaches and they thought it was due to the medication he was put on. However, his behaviour only got worse and after knocking over a newspaper boy, while dropping Tianè off at university, he was admitted into a psychiatric clinic. “I never knew I hit him, Tianè had to tell me to stop, and I was not aware of all these changes in myself,” Dewald said.

In a matter of two days, the left side of his body was drooping and dragging and he was non compos mentis. A MRI was done and the tumour was discovered. When Dewald was admitted to the clinic, Tina knew it was not depression. “I knew it was a brain tumour and I was balling my eyes out,” Tina said.

Dewald was referred to Life Wilgeheuwel Hospital. The neurosurgeon booked a craniotomy immediately as the aggressive metastatic melanoma tumour was growing too fast – 4% a day – and no time could be wasted. High doses of cortisone were given to reduce the swelling of the brain so the operation could take place, and anti-seizure meds were started. By this time, Dewald had to use a wheelchair. The 6 x 6 x 6cm tumour was removed and thankfully none of his brain had to be removed. It was estimated that Dewald had the tumour for three months. Six weeks after surgery, five sessions of stereotactic radiotherapy were completed.

Then the hunt, for where the melanoma tumour came from, started – a PET scan was done and dermatologists examined Dewald from head to toe and to today the primary source has never been found. “I am actually very relieved because that means in all likelihood his immune system destroyed the primary source, and we are very blessed that no other metastatic melanoma was found,” Tina said. However, Dewald’s reaction was different, “It scared the hell out of me…I had a huge revolt against my parents…I remember on holiday, when I was young, my brother and I were left in the sun. I would burn pink and have blisters…I was angry that my parents caused my brain tumour,” Dewald clarified. Tina defended his parents by saying at that time, there were no sunscreens and that generation was not aware of the damage the sun can cause, and she too also burnt as a child. Dewald dealt with this bitterness as his parents had passed on and he couldn’t talk to them about it. “There is no use worrying about something that can’t be changed,” he said.

However, the PET scan showed that he had polycystic kidney disease. “Can you believe that, you just survive brain cancer but you going to die from something else, quicker,” Dewald remarked.

Dewald’s improvement was instantly visible after the craniotomy. The left side of his body was no longer paralysed and his physical reflexes were responsive. The cognitive processes, however, took longer. Only three months afterwards did Dewald become aware of what had happened and his surroundings.

Luckily, Dewald never lost his sense of humour and many funny stories can be told of this period. Though, Tina struggled with this the first year as he would say inappropriate things to people. “At times, there is no filter. I wasn’t worried about the people but I had to learn patience,” Tina said. This is attributed to Dewald suffering from frontal lobe syndrome.

Dewald went to Rehab Matters for vestibular rehabilitation to help with balance, dizziness and vertigo and saw an occupational therapist for cognitive therapy, as his concentration wasn’t very good and he struggled to comprehend things, for example, the intro to a movie. “He would get completely lost. He would watch Two and a Half Men and Top Gear repeatedly as he had watched it before and could follow it,” Tina explained.

A support group, CanSurvive Head and Neck Cancer Support Group, was introduced to the couple and they gained value from it, from practical things like tips when suffering with dry mouth to dealing with emotions. This group was an immense help to Tina to help deal with what she was going through as the spouse.

Five months after the op, Dewald experienced a terrible seizure (due to the damage to the brain), and it was after this traumatic incident that Tina truly realised that life would never be the same.

More anti-seizure medication was prescribed, but due to his kidney disease – doctors couldn’t prescribe too much. He was told that he is not allowed to drive. This did not go down well with Dewald. “I told the neurologist, ‘I am a man, a man moves with wheels’.” Dewald ignored the instruction and continued to drive, until he had a seizure while driving to Knysna to celebrate Tina and his second wedding anniversary. Luckily, the couple weren’t injured but from that day on, Dewald realised the implications of him driving, and never wants to be responsible for the death of another person, so he stopped driving. Tina either takes him where he needs to go or he uses Uber.

Dewald still struggles with seizures today, averaging one a month. “When you have a seizure, you can only see what is in front of you, albeit blurry, but not what is happening around you. It is not painful…feels like a spasm but you just want it to end as you have no control over it,” he explained. Several factors trigger the seizures, such as fatigue, being hungry, stress, flashing and sharp lights, and watching TV. “I have learned to manage them,” Dewald added. He found that cannabis oil helps with the seizures.

A year and a half after the craniotomy, Dewald started working as an IT consultant. At that time, Dewald didn’t want anyone to know about his brain tumour as he was ashamed, having a preconceived idea of what society thought of brain cancer. “I assumed that the first thing someone thinks of when they hear brain cancer is ‘stupid’, that they automatically think you have brain damage, and I didn’t want my bosses to think I was incompetent,” Dewald said. However, three months later he disclosed his health problems to them and received great support and understanding. He now works half day from the office and the rest of the day from home, as the neurologist’s instruction is that he must rest (sleep) for an hour in the middle of the day. A side effect from the tumour is severe fatigue and if Dewald does get tired, it takes three days for him to recover. Tina commented that from the minute he started working, he was stimulated and a positive change could be seen in him.

Today, Dewald continues with his check-ups but can’t go for MRIs as the contrast/dye that is used, might make him go into kidney failure. “My doctor told me that my kidney disease is a higher risk than the cancer coming back, so that needs to be my priority,” Dewald explained, with Tina adding, “He will eventually go into kidney failure, that is inventible.” A side effect from the kidney disease is diverticulitis (when pouches form in the wall of the colon and they get inflamed or infected), which Dewald sometimes suffers with. Controlling his blood pressure and following a strict diet (avoiding potassium and phosphates) is the treatment path for his kidney disease.

“I have been given many chances to live so I continue to push on, but the reality of death after a brain tumour plays on your mind, so if Tina goes to the shop, I tell her how much I love her. I have gained more humanity through this process, but without a doubt, I wouldn’t have survived if I didn’t have Tina – the perfect wife – as my caregiver,” Dewald said.

Tina has been the pillar of strength and stood by her husband through sickness and health, however, she admits that it was through her husband’s illness that she started to appreciate life and live with a positive outlook. “I was a champion at self-pity, and would worry about the future, mope around because of my past that I couldn’t enjoy the present. But with Dewald getting sick, my whole perspective of life changed. Every day is a gift and every day is precious. My attitude changed and I started doing very well at work,” Tina said, laughing. What also helps Tina cope emotionally is by gaining knowledge, “I even subscribe to medical journals. The more I know, the less afraid I am, regardless if it is good or bad news,” Tina said.

As the saying goes, love conquers all.