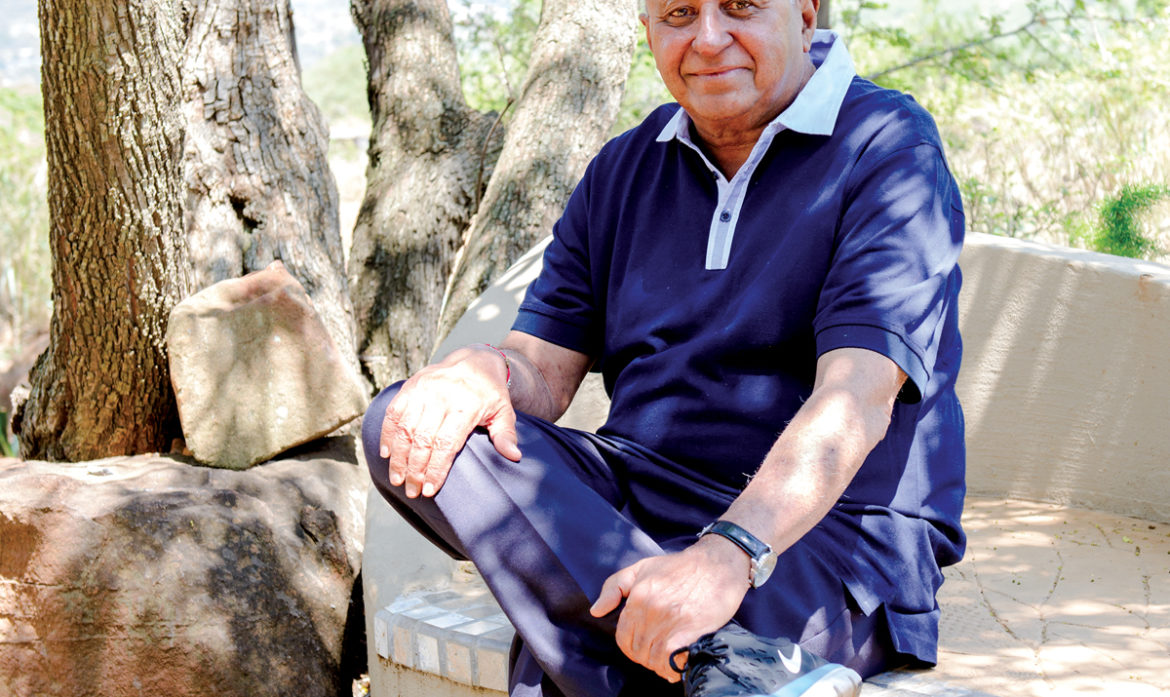 One would think the less one smokes, the lower the risk would be of getting lung cancer, however, in Mahendra Modi’s case he developed lung cancer associated with an EGFR mutation, at the age of 74, despite never smoking. But not once has he feared death. He shares his remarkable story with us.

Mahendra Modi (76) lives in Mulbarton, south of JHB, with his wife. He has three children and seven grandchildren.

In 2014, a week after Mahendra arrived in Australia to visit his son, Dharmesh, he experienced abdominal pain and had trouble breathing. He didn’t take it too seriously as he thought he had strained a muscle while doing yoga; he had always been an active and healthy person.

With Dharmesh being a radiologist and a concerned son, he sent his father for a CT scan while he was in Australia; thank goodness, as two nodules – one 3cm and the other 1,5cm – were found on the lining on his left lung. This was a week before Mahendra and his wife were supposed to return home, so they extended their stay.

The biopsy was very delicate and dangerous as the nodules were very close to the heart and aorta. Fortunately, there was a highly skilled interventional radiologist available, who managed to do a biopsy under CT guidance. It is more than likely that in South Africa, an open biopsy, in theatre, would have been required. A PET scan was also done to see if the cancer had spread; the scan showed that it hadn’t.

Surgery was then scheduled for the removal of the cancer from Mahendra’s lung. Throughout all of this, the gentle man of strong Hindu faith took it all in his stride, and even joked around with the nurses. “I had to do what I had to do,” he explained.

During the surgery, it was discovered that, in actual fact, the cancer had spread. The surgeon phoned Dharmesh and explained that he found lots of smaller nodules on the surface of the lung, and removing the two larger ones would be futile, and asked what should he do? Dharmesh replied, “What would you do if it was your father?” The surgeon left them as is.

Recovery was taxing, as Mahendra’s lung was deflated during the op, and included breathing and physical exercises with a physiotherapist. But, within a few weeks he was taking long walks with his wife, always remaining composed and positive.

The oncologist in Australia confirmed the biopsy result as being EGFR mutation positive and that he was eligible to take Tarceva, an oral drug, which he started taking in October – one tablet daily – before he came back home. He was advised to avoid grapefruit as it affects the absoprtion of the drug in the body.

Once back home, a family friend referred Mahendra to a local oncologist. He changed his diet by stopping consumption of chicken, meat and fizzy drinks, and kept his immune system strong. He made sure he was active – playing lawn bowls at Club level, a few times a week; going to the gym, playing the harmonium and continuing with his community work.

The side effects that he experienced were itchy dry rashes on his body and hair growth in odd places. His finger nails also became sore and painful. He was prescribed a mild antibiotic and cream for the rashes. Even though he endured these side effects, he never stopped or doubted the medication.

In April 2015, a CT scan showed that the nodules had reduced in size, and by June the nodules were almost gone. But then tragedy struck the Modi family – their daughter, Harshini (37), was diagnosed with breast cancer, three months after she fell pregnant with twin daughters. In his usual equable demure way, Mahendra told his daughter, “Look, we are a team. We will fight this together. I am here for you. I am not a patient anymore, I am a supporter.”

And so, Mahendra changed his role and stood by his daughter’s side, and in turn found even more motivation to survive. After completing a stressful treatment plan of chemo and radiation, Harshini gave birth at 32 weeks. A bout of complications and prayers followed, and thankfully today we can say both mother and daughters are healthy.

But then June this year, the nodules on Mahendra’s lung started shifting and growing. The cancer had changed its mutation. In Mahendra’s words, “The cancer becomes clever – once you start targeting it, it then changes its mutation.” It was explained to Mahendra that Tarceva normally has a lifespan of six to 12 months of working, but he was lucky in that for him it worked longer – two years.

Due to his oncologist not being too keen to have a biopsy performed on him, a blood test was done to see if the cancer had mutated into an EGFR T790 mutation. If it had changed to this, Mahendra would be able to start taking Tagrisso, another oral drug, however, the blood test came out negative and proved not to be a match for this medication. But, due to the blood test not being 100% accurate, a biopsy was needed. It was decided that he would go back to Australia to have a second CT-guided biopsy.

He had the biopsy this October with the same radiologist as before, and he is still awaiting the result. If the result is negative for the EGFR T790 mutation, intravenous chemotherapy will be needed and maybe radiation. But, he is hoping that it is a match so he can move onto Tagrisso.

The loving father and grandfather added that it is very important to stay calm and not to panic. “You will come across negative people, even family members, but you have to rather surround yourself with positive people.”

Recently, Mahendra had the pleasure of meeting the High Commissioner of India at a function, showing that he is living his life as he usually does, and that his disease does not stop him from living life to the fullest.

What is EGFR mutation lung cancer?

This type of lung cancer is not related to cigarette smoking. The growth of this cancer is driven by a mutation within the lung cancer – the EGFR mutation. This unique mutation is particularly responsive to a blocker called tyrosine kinase inhibitor (TKI). The TKI Mr Modi is taking is called erlotinib (Tarceva). It is associated with longer survival and better response than chemotherapy.

What are the stats of people diagnosed with lung cancer even though they never smoked?

Approximately 15% of all lung cancer cases are caused by EGFR mutation (which is mostly related to non-smokers).

What type of patients will be more likely to have the EGFR mutation lung cancer?

Never smokers or very light smokers, East Asians (Chinese, Japanese, Koreans, etc.), being female and having lung cancer of the type called adenocarcinoma under the microscope (or histology).

Explain the difference between a CT-guided biopsy and an open-biopsy.

A CT-guided biopsy is also available in South Africa, but depends on whether an expert is good enough to avoid complications such as major bleeding and pneumothroax (air trapping the lung). The CT-guided biopsy is a minimally invasive way by inserting the biopsy needle while having the help of CT imaging. It is dependent on the location of the cancer and the technique of the interventional radiologist. If performed correctly and expertly, the complication is much lower than an open technique, therefore, quicker “healing”. An open-biopsy is done by a cardio-thoracic surgeon. He/she inserts a thoracoscopy (camera) inside the lung cavity and takes a sample of the lung cancer. This will result in a pneumothorax, and the patient will be required to be treated in ICU setting post-op. This is a common procedure in South Africa.

Explain why the cancer couldn’t be removed?

Mr Modi’s lung cancer started as stage 4 (the last stage in lung cancer), because of the nodules on the surface of his lung. This stage is not curable by cancer surgery.

Explain why the cancer stopped responding to Tarveca?

The cancer started to grow on Tarceva therapy, therefore it is developing resistance. The resistance pattern can be another mutation developing, such as the T790 mutation, or changing to another type of lung cancer called small cell lung cancer.