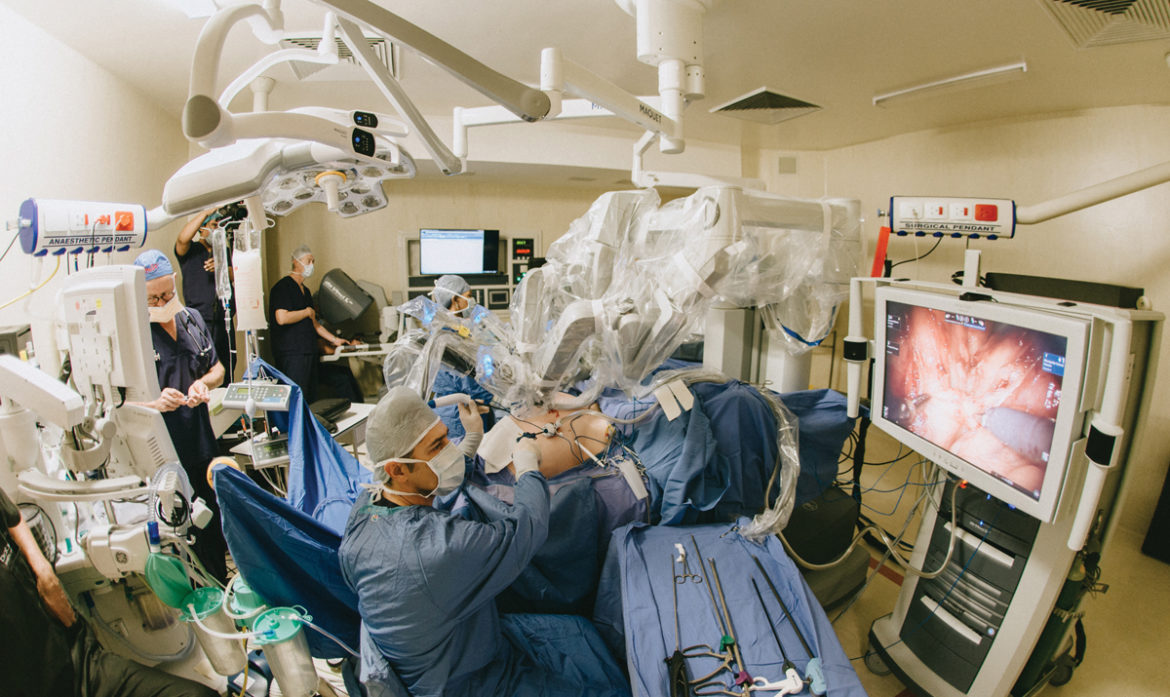 Within the healthcare environment there are so many technologies emerging, it is often hard to tell which options are safe or effective. At Mediclinic Durbanville, the da Vinci robotic surgery is proving its worth in terms of improved patient outcomes.

When talking to Dr Gawie Bruwer, a urologist at Mediclinic Durbanville who has been using the da Vinci since 2014, we can easily detect the excitement with which he speaks about the results being achieved. From the quicker recovery after the less invasive procedure to the more accurate diagnosis of the cancer progression, the patients being treated with this robot are definitely seeing the benefits.

Before da Vinci was available, the only surgical option was an open prostatectomy, involving significant surgical incisions, pain and side effects after surgery. The entire prostate could be removed, but the surgery came with a great deal of blood loss, significant pain, the possibility of infection, a longer recovery period and extended hospital stay. It would often lead to a loss of bladder control and erectile dysfunction if the complicated plexus of nerves situated around the prostate was severed.

The da Vinci’s robotic arms are automated but the surgeon still controls every move. The mechanical wrists of the robot mimic the hands of the surgeon in a replica of the traditional invasive surgery, but much more delicately and precisely. It takes away any shakes or jitters that the surgeon might be experiencing. Dr Bruwer said, “You have10 times magnification of the inside of the body, so you can see even the smallest veins and arteries. And you can spot them before they’re visible with the naked eye.”

Dr Bruwer has been closely monitoring the outcomes of his da Vinci patients, focusing on the accurate diagnosis and treatment of the disease. “An initial biopsy on the patient provides a Gleason score which, together with a PSA score, guides therapy for prostate cancer. In over 50% of patients I have seen, the aggressiveness of the cancer is upgraded once the excised prostate is analysed by the pathologist. The treating doctor would not have this insight from the initial biopsy result alone, leading to possible under-staging and under treatment. This new information allows the urologist or oncologist to adjust their further treatment accordingly, thus avoiding under treatment,” said Dr Bruwer.

In September 2014, Thomas Mouton became the first patient at Mediclinic Durbanville to undergo a da Vinci prostatectomy. He was discharged after only two days, had minimal side effects and to date he is still prostate cancer free. While the initial operation took about five hours, most procedures now average between two to three hours depending on complexity.

He explained, “The surgery was done under supervision of an international doctor responsible for the training in South Africa. When I regained consciousness, I realised there was a great deal of excitement about the outcome.

I was monitored during the night and the following day. I experienced the slightest bit of discomfort due to the catheter, but no pain and bleeding at all. I was released two days later. I could go to the shops and I had a performance with my band the next day!”

Prior to surgery his PSA score was 8. Since surgery, it has remained at 0 and there is no prostate cancer present.

Rainer Ladewig, another robotic surgery patient recovering from prostate cancer believes that “with the psychological effect that the condition has had on me, it was indeed a relief to know that one is being offered the most modern prostatectomy operation available.” Mr Ladewig was discharged within a day of his operation. “I was walking around the passages of the hospital without any intense pain, besides the discomfort where the incisions were made. I cannot believe the mild experience I had with the operation.”

Patient testimonies such as these are common. “We have performed 230 robotic prostatectomies at Mediclinic Durbanville, with myself having done over 100, and we are delighted with the difference it is making in our patients’ recovery,” concluded Dr Bruwer.