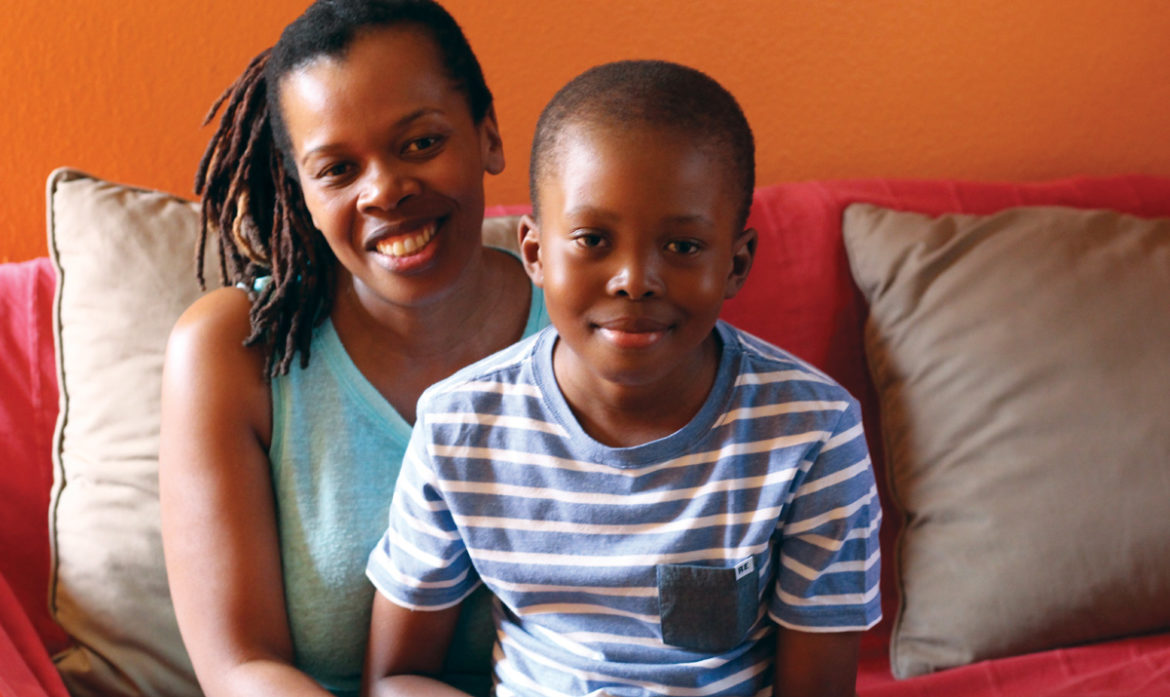 Siyamthanda Hlantshwayo is a resilient, 12- yearold boy who is fighting childhood cancer. It all began in April 2014, after his 10th birthday on 6 April 2014, when his mother, Thandekile, noticed lumps on his neck. “I panicked and immediately took him to a pediatrician; afraid he had mumps,” said the mother. To her surprise she was told that he has Lymphoma Cancer; a blood cancer that occurs when cells of the immune system called lymphocytes, a type of white blood cell, grow and multiply uncontrollably. In disbelief, Thandekile visited another pediatrician for a second opinion, who referred her son to a Paediatric Oncologist at Baragwanath Hospital.

Thandekile could not believe this was happening to her son. She felt lost, scared, confused and angry. “How could God let this happen to her?” she thought. She had heard of cancer but no one in her family had ever been diagnosed with this disease – this was something new to her family and Siyamthanda kept on asking if he was going to die.

Through the CHOC Childhood Cancer Foundation Parent Support Group her anxiety was eased; she no longer felt alone and she understood that this diagnosis was not necessarily a death sentence for her child. She joined the CHOC Parent Support Group, where parents share their individual journey and provide support to each other. Because the family lived close to the hospital, they did not need to make use of the CHOC house and transportation fund that is available for those parents who come from far, however, she received support from some of those parents who are making use of this facility.

Siyamthanda spent 10 days in hospital on intensive treatment. The lumps in his throat disappeared as he responded well to the treatment, but it was not over yet. He had to attend his next treatment as a day patient, three times a week in the morning prior to going to school. Although the treatment was effective, Siyamthanda started losing his hair and he was reluctant to continue. He was afraid that the children at school would make fun of his hair-loss so he wore a hat every day.

He finished his intense chemotherapy treatment in November 2014, but due to his immune system being weak in 2015 he developed other illnesses. Those were tough times for the Hlantshwayo family as Siyamthanda spent most of his time in hospital and his six-year-old brother was not happy to see him there; he wanted Siyamthanda home and on the soccer field playing with him. His schooling was disturbed to a large extent. Life also became tougher for Thandekile; her employers tried and agreed to support her through this difficult time, but could not see it through. All the absenteeism led to the point where she was forced to resign in order to give her full attention to her son. This created a financial strain on the family; things were really difficult.

Siyamthanda’s condition improved and ward 43 Baragwanath Hospital had become his second home. The Paediatric Oncology Ward was very homely and the medical staff was so friendly – all the children in the ward called them mommy. Siyamthanda enjoyed video games, CHOC interactive play, which is an educational game by a CHOC Volunteer, and for support and counselling he saw a CHOC Social Worker weekly. Siyamthanda’s school was very supportive during this time; the teacher visited him at the hospital to assist him in catching up on his schoolwork. His classmates wrote “Get Well Soon” letters and the teacher delivered them to him every week. A note from one of the letters read: “the whole class misses you, we all have not seen you in a long time, we wish you may come tomorrow.” Often there were days when Siyamthanda did not feel like continuing with his treatment as it felt like this would not come to end. However, the words from his classmates, and his mother’s strength kept him going. She continually reminded him; “We will get through this, God is with us,” is what she would say with a brave face while dying inside.

Siyamthanda finally reached the end of the road when he completed his treatment at the end of May 2016.

From all of us at CHOC, we wish him all the best for his future!

Message fromSiya’s Mother for other Moms: Focus on the treatment your child is on and take it one step at a time. Listen to the doctors and no one else. Cancer is not a curse, but a curable disease when diagnosed early.

The sooner any cancer is detected, the greater the chances of survival. These are the symptoms to watch for in your child – and if they occur, seek medical help immediately: • White spots in the eyes, a squint, blindness and bulging eyeballs. • Lumps in your child’s abdomen, pelvis, scalp, neck, limbs, testes or pubic area. • Unexplained weight loss, fever which lasts longer than 2 weeks, exhaustion, paleness, easy bruising and sudden bleeding. • Aching bones and joints, as well as easy fractures. • Changes in walking, balance, speech or hearing, a headache which lasts longer than a week (with or without vomiting) and an enlarged head. For more information on childhood cancer, visit www.choc.org.za or contact them on 0861112358