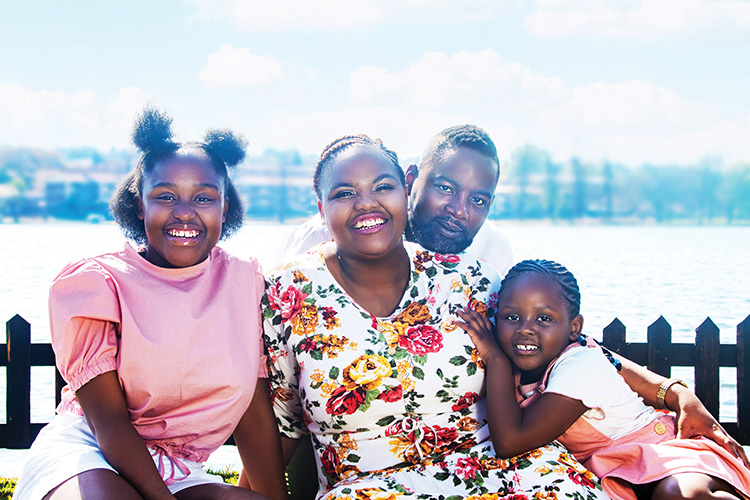 After a year and a half of Masesi Ndaba being in and out of hospital and told there is nothing wrong with her, she was finally diagnosed with neuroendocrine cancer. She details this taxing journey.

Masesi Ndaba (36) lives in Fleurhof, Gauteng with her partner and two daughters, aged 14 and six.

Masesi first started experiencing chest pains in 2018. Her GP diagnosed it as acid reflux. ‘I was on medication for this for the longest time, but the chest pain only got worse,” she says. “I then got severe headaches and the doctor thought I had a skin allergy as I had red areas on my skin, so he referred me to a dermatologist. Tests were done and there was nothing wrong with my skin.”

“By this time, I had chronic chest pain and headaches and was admitted to hospital where I had a gastroscopy (examination of the oesophagus, stomach and duodenum). Once again nothing was found and I was discharged. A week later, I went to casualty again as I was in so much pain again and the specialist said, ‘I don’t know what is wrong with you. You don’t even have acid reflux.’”

Masesi decided to go to a different hospital to get a second opinion. She went to casualty and the treating doctor referred her to an ENT saying her sinuses needed to be drained. This didn’t resolve any of her symptoms.

By December 2018, the mother of two was in excruciating pain. “It felt like something was squashing my chest. I was admitted to hospital once again and for two weeks various tests were done but yet still no proper diagnosis as to why I was feeling like I was. The specialist said that he saw something white on my lung and it looks like I had an infection but it’s clearing up. He didn’t give it a hundred percent attention and I was discharged,” Masesi explains.

By this time Masesi was so frustrated and felt like all the doctors weren’t listening to her. “They didn’t understand me. I remember sitting in my primary doctor’s room and he said, ‘Okay, you tell my what you think is wrong with you?’ and I said, ‘cancer’.” Masesi thought this because of Dr Google.

In February 2019, Masesi was experiencing shortness of breath and found she would get tired quickly. “If I stood I got tired. If I sat I got tired. I had to do everything within a limit and

I would sweat so much. I then got a terrible cough and started wearing pads as every time I coughed, urine would come out. And I would get hot flushes,” she explains

By April 2019, Masesi explained to her doctor that she can’t sleep on her right side of her body as the pain was too much. “I would sleep sitting up,” she adds. This time the doctor thought she had problems with her liver. “I was so confused. How can a liver problem give you headaches, reflex and chest pain?”

Medication was prescribed but her symptoms continued.

By May 2019, Masesi was emotionally depleted and physically exhausted. “I wanted a breakthrough so I went to hospital and asked to be admitted so more tests could be done. By the second week, various consults were set up with an ENT, a pulmonologist and gastroenterologist. A bronchoscopy (a procedure to check lungs and air passages) was done first and a growth was found on her lung. The pulmonologist explained it was quite large and surgery was needed to remove it and then it would be sent for a biopsy. The results showed that Masesi has metastatic neuroendocrine cancer (NETs) in her lung which spread to her bones and liver. Finally, there was complete reasoning for her chronic ill health.

“I recall the specialist who noticed something white on my lungs earlier coming to see me after the diagnosis as he was still one of my treating doctors and he was so disturbed.

He looked at me and asked, ‘Are you okay?’ and I said, ‘Yes, doctor.’ The nurse kept asking him a question and he didn’t answer her. Eventually, he told her that he is concentrating on me, his patient. I think he felt bad. He offered to organise me counselling but I declined. When he walked out, I prayed to God saying that I don’t blame the doctor. That I was too far from God and that He needed me to wake up and remember He is God. I don’t blame anyone. All the doctors I saw didn’t fail me. Many friends advised me to take legal action but to me that isn’t worth it; I’m still living.”

Masesi was referred to an oncologist for treatment and only has praises for her. “Having her as a doctor is like having a friend. She is always friendly and upbeat. My employer also wanted to send me for counselling but what I get from my oncologist is more than counselling. She also has a policy that I need to inform her of any slight change in my body so she knows what she is dealing with,” Masesi says.

Treatment commenced with lanreotide, a somatostatin analogue injection, every three weeks. However, this was stopped after two months as Masesi’s tumours were still growing and she experienced bad abdominal pain as a side effect. She was then prescribed a combination of oral chemotherapies (capecitabine and temozolomide) and also takes zoledronic acid for her bone metastases every three weeks. She is still currently on these treatments.

“The side effects from the bone-strengthening medication feels like I’m getting flu (sinuses blocked) and my legs feel weak and my body aches. This lasts for about a week,” she says.

At first Masesi thought she would need another surgery to remove the cancer from her liver but luckily her oncologist wanted to first see how it reacts to treatment. “I’m happy to say there is no cancer in my liver anymore,” she says.

Since surgery and treatment, Masesi says she can do everything but to a limit. “I don’t overdo it. When I clean the house, it takes three hours,” she says laughing. “So, everything I do, I take my time.”

When asked how she defines herself, Masesi responds, “Honestly, I don’t consider myself as having cancer. Yes, the doctors misdiagnosed me but I still lived. I’m still living. I never talk about it. When I speak to people, I tell them that I got sick. The reason why I don’t tell people is that I don’t want sympathy and them feeling sorry for me, that changes their attitude towards me and they treat you like a patient and like you’re going to pass out any minute.”

The mother of two is making the most of her life and ends off by saying, “Nowadays everything is my hobby. I want to do everything. I want to live to the fullest.”

Laurelle Williams is the editor at Word for Word Media. She graduated from AFDA with a Bachelor of Arts Honours
degree in Live Performance. She has a love for storytelling and sharing emotions through the power of words.
Write to editor@wordforwordmedia.co.za