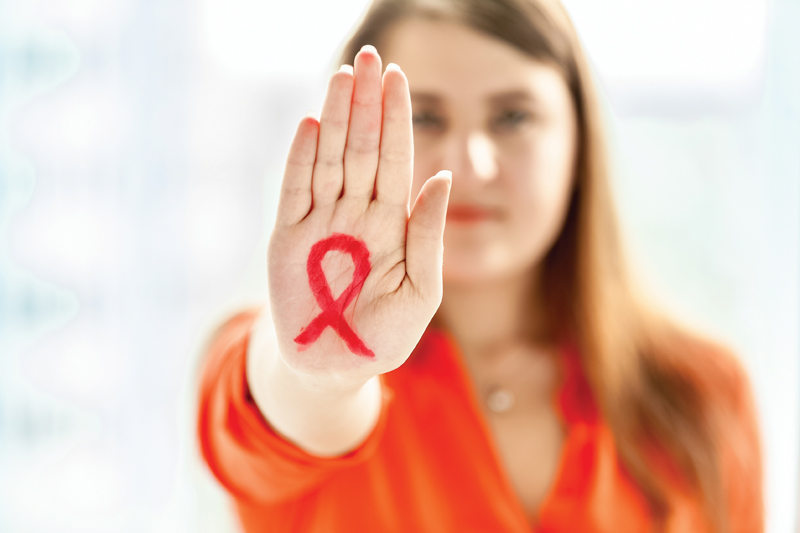 With World AIDS Day observed on 1st December, Dr Sarah Rayne talks about the connection between HIV/AIDS and cancers.

HIV/AIDS affects one fifth of women of reproductive age in South Africa (SA). It is caused by infection with the human immunodeficiency virus (HIV), which attacks and eventually destroys the immune system of the body. Because the immune system is not working, people are more at risk of infections and some types of cancer. They may also suffer from other health problems related to these.

HIV spreads through bodily fluids, and the most common way it is passed in SA is through unprotected sex with someone who has the virus, or around birth in women with HIV, passing it on to their baby. It is not spread via animals, mosquitos or hands.    It is important to know your HIV status, and everyone in SA is encouraged to have an HIV test each year.

If you are HIV-positive, you can take medications, called antiretrovirals (ARVs), which will help your immune system fight the infection. These medications have become so successful, that they allow people with HIV to live long lives. This means that HIV patients need to know how to keep themselves healthy from cancers not related to HIV, as well as ones that are. HIV can also cause problems in the breast that are unrelated to cancer.

1. Cancers related to being HIV-positive

Some cancers occur very commonly in people who have HIV and can contribute to their disease worsening to full-blown AIDS. These are Kaposi’s sarcoma, Non-Hodgkin lymphoma (NHL) and cervical cancer.

Kaposi sarcoma is related to a secondary viral infection with a herpes-type virus (HHV-8), which causes reddish-purple plaques and nodules on the skin and in the mouth. It can be treated with chemotherapy and radiation, but often improving the body’s ability to fight the infection with ARVs can help immensely.

Non-Hodgkin lymphoma starts in the lymph glands and causes them to increase in size quickly. It can spread – especially in people who are HIV-positive – to other glands and to the central nervous system, causing confusion and seizures. Whilst it is found in HIV-positive patients, most people with NHL don’t have HIV.

Cervical cancer is also linked to another virus, the human papilloma virus (HPV), which is passed during sexual intercourse; HPV can be tested for. Cervical cancer is cancer of the lower part of the uterus (the cervix). It occurs when cells become progressively more abnormal before turning into cancer. These abnormal cells can be picked up on a yearly Pap smear, and can be treated. Cervical cancer is more common in women who are HIV-negative, but can be more aggressive in HIV-positive women, with quicker progression from abnormal cells to cancerous ones. A vaccine is also available for this virus and is commonly available for girls aged 9-13 years.

2.Cancers occurring in people with HIV

All women are at risk of breast cancers, and the incidence in HIV-positive women doesn’t appear to be different to the general population. Having HIV doesn’t put you at increased risk of breast cancer. However, other cancers which occur despite being positive, such as breast cancer, or other cancers (colon, prostate among others), can grow or spread more quickly in HIV-positive patients. The treatments can also have more side effects, leading patients to be unable or unwilling to complete them.

Today patients with HIV and cancer are treated with exactly the same treatments as any other cancer survivor, but the doctor will ensure that the patient also starts ARVs to minimise the extent of the HIV infection. ARVs have improved outcomes in people with cancer and HIV. Studies internationally and in SA have shown that surgery or chemotherapy doesn’t hasten AIDS or make HIV more active. It is important that oncologists who are treating any patient with HIV are skilled at managing both diseases.

3.The breast and HIV

The breast can be affected by HIV, either directly or due to its immune-compromising behaviour.

Increased breast size is seen in men and women with HIV. In men, it is called gynaecomastia and can be seen in 2-5% of men on HIV treatment. One drug – efavirenz – can be the most common cause. In most circumstances, the gynaecomastia   is mild and will resolve with a change of treatment. In women, the breasts can swell to extremely large proportions causing cosmetic and physical disability. There can be a change in the body’s fat distribution causing a hump on the back too. Any problems or changes should always be investigated, and may occasionally need surgery.

Skin rashes from herpes and shingles can affect any part of the body, including the breast, and can cause intense pain with very little skin change. If caught early, it can be treated to shorten the infection, and the pain can always be helped. (Shingles, which is a reactivation of a viral infection, can also occur in patients taking chemotherapy).

Breast lumps in any women, especially in an HIV-positive woman, should be investigated with triple assessment of clinical examination, radiology and pathology taken by guided biopsy. Cancer can progress quickly in these women, but most lumps are normal and not cancerous. Commonly, lymph nodes in the breast or under the arms are enlarged as they fight the HIV infection; they can be felt or become painful.

Infections of the breast from bacteria or TB cause lumps, pain and redness in the breast. An abscess develops where infection is not treated and feels like a lump. An ultrasound works well to detect them, allowing the pus to be removed.

As we move into a phase of HIV care that involves early and good treatment regimens, it is important to ensure that everyone knows their HIV status in order to optimise care and begin life-saving antiretroviral treatment.

If you are HIV-positive, it is especially important to keep yourself healthy, and ensure you take good care of your immune system. These are the same principles as keeping the immune system healthy when you’re taking chemotherapy. This includes measure such as eating well, exercising, managing your stress levels, stopping tobacco and snuff. It also means being proactive about avoiding infections, including avoiding contact with people who are ill, taking antibiotics early if you get an infection, and making sure you have all available vaccines.

Screening is also particularly important for people with HIV, as looking for cancer before any symptoms are seen can often mean that cancer is detected early. There are no tests to screen for Kaposi sarcoma or NHL, but there is screening available for cervical cancer in public and private facilities in SA. Pap smears are recommended more often in women with HIV, particularly in the first year after diagnosis. Part of the routine of keeping yourself healthy also means it is important to get your breasts screened after the age of 40 with a mammogram.